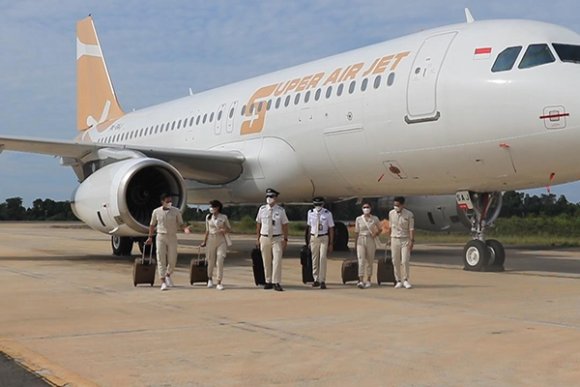 Indonesian startup Super Air Jet began commercial operations on Aug. 6, albeit in a limited manner as strict movement-control restrictions remain in force across the country to curb the spread of COVID-19.

The LCC has launched daily flights from Jakarta (CGK) to Medan (KNO) in Northern Sumatra and Batam (BTH), a haven for startups. In a statement, the airline said it chose the airports since they serve the “most popular destinations for millennials,” its target customer segment.

Super Air Jet, which received its air operator’s certificate (AOC) in June, has announced its intentions to add Padang (PDG), Palembang (PLM) and Pontianak (PNK) to its initial network.

Indonesia has extended the highest level 4 restrictions for the island Java, home to capital Jakarta and other major cities and tourism center Bali, at least until Aug. 16. Most of the country faces restrictions through Aug. 23 as the government attempts to bring an outbreak under control.

According to CAPA/OAG Data, the CGK-KNO route currently offers 25,273 weekly seats—or 58% of 2020 levels when the pandemic was not affecting the country so seriously. The more transmissible Delta variant has driven infection numbers up, prompting the government to take more stringent measures. Indonesia AirAsia has already suspended all air service.