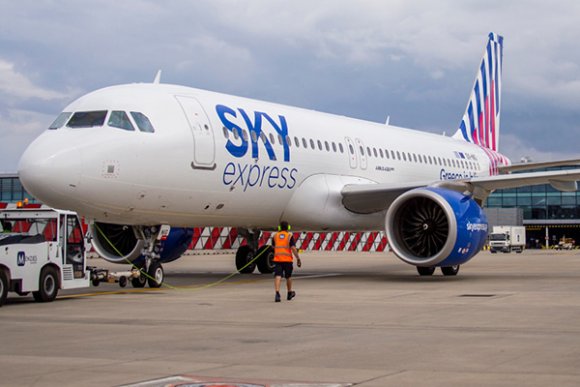 London Heathrow (LHR) became the latest international destination to be added to Sky Express’ network on Aug. 1, with the Greek carrier launching a 6X-weekly service.

The UK capital joins the likes of Brussels (BRU), Hamburg (HAM), Paris Charles de Gaulle (CDG) and Rome Fiumicino (FCO) as new overseas points that have been launched so far this year.

The expansion comes after the Athens-based carrier, which previously focused on domestic services, last October agreed to lease six Airbus Α320neos so it could launch scheduled international operations.

Five of these routes are from Athens International (ATH)—to BRU, Larnaca (LCA), LHR, CDG and FCO—while another six are from Heraklion (HER) on the island of Crete. From HER, the carrier flies to Amsterdam (AMS), HAM, Lille (LIL), Lyon (LYS), Nantes (NTE) and CDG.

The World Routes 2021 attendee also flies a further three A320neo routes from the resort islands of Kos (KGS) and Zakinthos (ZTH) to AMS, as well as Kefallinia (EFL) to LCA.

Alongside the network expansion, the airline in July entered into an interline partnership with Air Serbia, opening up new connections via Belgrade (BEG) and ATH. The agreement allows Air Serbia’s passengers to connect onto Sky Express’ domestic network of 26 destinations via ATH under a single itinerary, while Sky Express’ customers will gain access to Air Serbia’s European network.