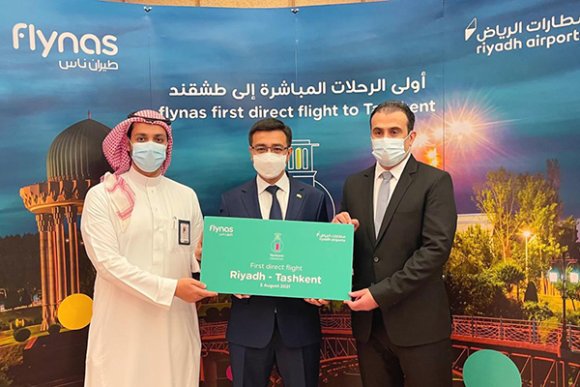 Saudi LCC flynas has launched its first nonstop flight to Tashkent (TAS), the capital of Uzbekistan. Flights from Riyadh’s King Khalid International (RUH) will be twice a week onboard Airbus A320s. “We aspire to build bridges with numerous countries around the world through increasing partnerships and launching more destinations in what will fulfill the air travel industry’s strategic targets and enable flynas’ position as a pioneering global airline,” CEO Bandar bin Abdulrahman Al Muhanna said.

IndiGo has commenced operations from Bareilly (BEK), the 68th domestic destination in the Indian carrier’s network. From the airport, the airline will offer four flights per week to Mumbai (BOM) and three per week to Bangalore (BLR). “Bareilly has always been special as it was identified as one of the 100 Smart Cities being developed in India, making it a promising hub for IT/ITeS services,” IndiGo chief strategy and revenue officer Sanjay Kumar said. “Enhanced connectivity will promote trade and commerce while offering support in realising the vision for Bareilly as it progresses towards a smart future.”

A sixth aircraft will be allocated to Wizz Air’s Tirana (TIR) base in December, enabling the launch of four new routes. Billund (BLL), Liverpool (LPL), Madrid (MAD) and Oslo Sandefjord Torp (TRF) will all join the ULCC’s network from the Albanian airport between Dec. 9-12. Liverpool will receive three flights per week, while the three other destinations will be served 2X-weekly. In addition, Wizz plans to increase frequencies on eight existing routes, including flights to London Luton (LTN), which will grow from 12X-weekly to 14X-weekly.

Virgin Australia plans to launch one new domestic croute and resume another ahead of the September school holidays in Australia. The airline will begin flying between World Routes 2019 host Adelaide (ADL) and Launceston (LST) in Tasmania. Flights will be 3X-weekly on Tuesdays, Thursdays and Saturdays from Sept. 7. Additionally, Virgin Australia will restart service between ADL and Darwin (DRW), serving the route four times per week.

Transavia France, which began its first domestic routes in France last November, has announced plans to begin a new service in the country this winter. Flights from Montpellier (MPL) to Paris Orly (ORY) will begin on Nov. 8, operating up to 4X-daily. The carrier is taking over the route from parent Air France, which currently offers 3X-daily flights. Air France also serves MPL-Paris Charles de Gaulle (CDG) up to 4X-daily. Transavia will compete directly with easyJet’s 4X-weekly MPL-ORY service.

Bahrain’s Gulf Air will resume its direct operations to Moscow Domodedovo (DME) in Russia starting with 2X-weekly flights, beginning from Aug. 14 using A320neos. The route from Bahrain International (BAH) was operated daily prior to the pandemic. “Month by month, we are resuming services to more destinations of our pre-pandemic network and we can see the world slowly recovering as more people are confident to travel again,” acting CEO Waleed Abdulhameed AlAlawi said.

Alicante (ALC) in Spain will join the route map of Ukrainian carrier Bees Airline later this month. Flights to the Spanish city will be operated from Kyiv Zhuliany (IEV) using Boeing 737-800s. The route will initially be served once a week from Aug. 20, rising to 2X-weekly from Aug. 30. Bees Airline said the launch of the new service follows Spain’s decision to easy entry restrictions for Ukrainian citizens.

Norwegian has resumed service from Oslo Sandefjord Torp, restoring flights to Alicante (ALC) and Malaga (AGP). The LCC has also announced plans to fly 259 routes from the Scandinavian region during the summer 2022 season, of which 136 are from Norway. “With this summer schedule we will continue to deliver on our strategy of investing in Norway and the Nordic region,” CEO Geir Karlsen said.

“Before the air service shutdown, Egypt was one of the most popular destinations among Russian tourists,” Biblio-Globus MD Irina Kostenko said. “Egypt has always been considered a winter vacation destination, and we expect an even bigger surge of bookings closer to winter.”

Air France will reinstate its route between Paris Charles De Gaulle (CDG) and Seattle (SEA) from Nov. 8 in order to serve “growing demand and complement flights currently operated by joint venture partner Delta Air Lines.” Service will be 3X-weekly onboard an A350-900 with 324 seats. “The European Union opened its borders to vaccinated Americans earlier this summer, and Air France is thrilled to be able to meet growing demand from Americans eager to travel,” SVP Eric Caron said. Air France will also increase capacity to Los Angeles (LAX) from Nov. 1, adding two weekly frequencies to total 17X-weekly flights.

UK leisure airline Jet2.com said it has added more summer flights to Croatia, Madeira and Malta in response to “very strong demand” after the countries were placed on the UK government’s "green" travel list. An additional Sunday service from Birmingham (BHX) to Malta (MLA) is being added in September, taking the route to 2X-weekly.