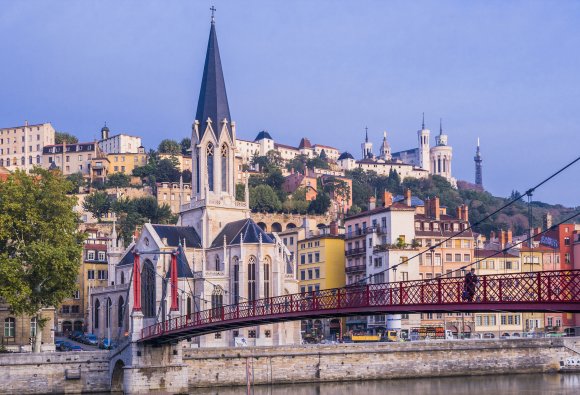 By David Casey and Aidan Mooney

Although many of Flybe’s former UK domestic services have now been taken over by other carriers, analysis of the defunct airline’s international network paints a different picture.

The latest schedules data provided by OAG shows that of the 109 international airport pairs the carrier connected with direct flights during 2019, only 37 are set to be served nonstop during the 2021 summer season.

Among the routes still without an operator is Birmingham (BHX)-Lyon (LYS), which was served up to 7X-weekly by Flybe during the summer 2019 season using Embraer 175 aircraft. The airline offered up to 1,232 two-way weekly seats during the peak summer months, falling to about 700 seats towards the end of the season.

Flybe initially picked up the BHX-LYS route in May 2013, 14 months after Air France suspended flights between the destinations. The 898-km (558-mi.) route operated year-round and remained a mainstay of the airline’s network until its failure in March 2020.

Although BMI Regional also served the market nonstop between May and September 2013, Flybe was otherwise the sole provider of scheduled flights between the destinations from 2013 onwards.

Figures provided by Sabre Market Intelligence show that total O&D traffic between Birmingham and Lyon totaled 53,695 two-way passengers during 2019—a 17.6% reduction on the previous 12 months.

The fall was largely due to a reduction of nonstop service by Flybe in the months leading up to its administration, with the airline discontinuing flights in November 2019 only to restart operations the following month.

However, in the years prior to Flybe’s failure, O&D traffic remained steady, averaging at about 63,000 two-way passengers from 2014 to 2018.

Although the Sabre data shows that 53,695 two-way passengers traveled between Birmingham and Lyon in 2019, ASM analysis of the wider catchment area suggests that the market is potentially much larger. Looking at two-way passengers to and from LYS within a 60 mi. radius* of BHX shows total O&D traffic of 102,000 passengers during the year.

ASM’s Airport Catchment Analyser reveals that BHX captured 26% of this, with London Gatwick (LGW), Heathrow (LHR) and Luton (LTN) accounting for a combined 68%. Passengers also traveled from the BHX catchment to the likes of Manchester (MAN) and Bristol (BRS).

The research shows that BHX has a higher outbound element (resident), accounting for 55.8% of the two-way traffic, while the London airports attracted more inbound (visitor) traffic. For LGW, the split is 68% in favour of visitor traffic, while for LHR it is 55.1% and for LTN 57.6%.

Resident journeys originate in the BHX catchment area, while visitor traffic originates from LYS and stays in the BHX catchment. As East Midlands (EMA) is the only other airport within a 60-mi. radius of BHX, the data highlights that passengers are willing to travel further afield in order to reach LYS.

With the vaccine rollout continuing across Europe, coupled with pent-up leisure demand, there could be an opportunity for carriers such as easyJet, Jet2.com, Air France or Transavia to consider serving the BHX-LYS market.

Looking at a route with comparable characteristics to BHX-LYS gives us an idea of how the Birmingham catchment area may react should the market become served with regular flights.

For this, Dusseldorf (DUS) in Germany was selected as a benchmark because it is a similar-sized, non-capital city, as well as being a similar distance away from BHX (560 mi. to LYS vs 380 mi. to DUS).

Analysis of the data shows that DUS received 10 times the capacity from BHX in the 12 months to Q1 2020, compared with BHX-LYS, as well as 49% more capacity from London airports.

Looking at the number of passengers who traveled from within a 60 mi. radius* of BHX to DUS in the year to Q1 2020 shows traffic of 248,462 two-way passengers. ASM’s Airport Catchment Analyser highlights that BHX captured 57% of this traffic. The same comparison for traffic to LYS shows BHX captured about 26%.

This suggests that the higher and more frequent service from BHX to DUS better meets the needs of consumers, therefore leading them to choose BHX over airports outside the catchment area.

*Traffic from outside the radius will have used BHX services, but a distance of 60 mi. was selected for purpose of this analysis