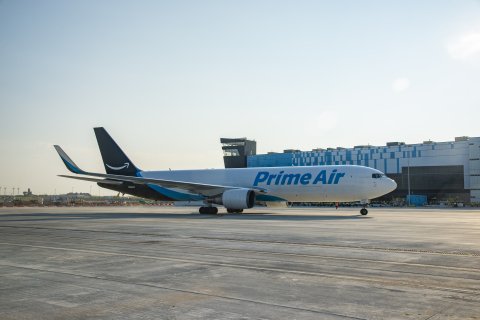 Amazon Air officially launched operations out of its brand new, $1.5 billion air cargo hub at Cincinnati/Northern Kentucky International Airport (CVG), part of a push by the e-commerce giant to accelerate shipping speeds across its network.

The new CVG hub is intended to be Seattle-based Amazon’s primary artery for sorting and processing packages across its logistics network of more than 40 US airports. Construction of the campus—which sits on a sprawling, 600-acre site located just a half hour’s drive from Cincinnati—has been ongoing since ground was broken by CEO Jeff Bezos in 2019.

By the end of 2021, the CVG facility will operate a dozen daily flights and process “millions of packages” per week, Sarah Rhodes, VP of Amazon Global Air, wrote in a blog post.

“We’re excited to get rolling in Northern Kentucky, and we’re thrilled to employ thousands of fantastic people from the area in this next-generation, highly sophisticated facility that will connect our air cargo network for years to come,” Rhodes said in a statement.