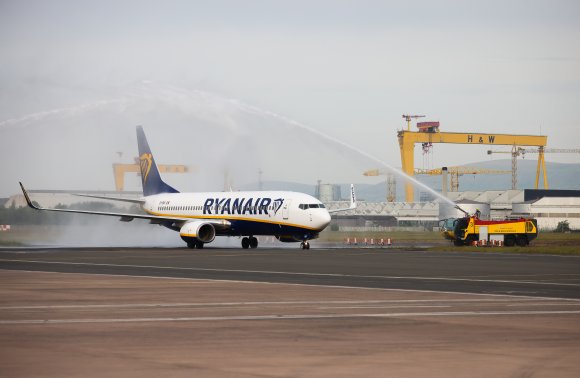 Ryanair is ending operations at both of Belfast’s airports, blaming the UK government’s “refusal to suspend or reduce” air passenger duty (APD). The Irish carrier also cited a “lack of COVID recovery incentives” at each airport for the withdrawal.

Flights from Belfast City Airport (BHD) will end in September and from Belfast International (BFS) in October. The decision sees the Dublin-based airline completely exit the Northern Ireland market having already suspended service from City of Derry (LDY) in December 2020.

In a statement, Ryanair said that aircraft stationed in Belfast would be “reallocated to lower cost airports elsewhere in the UK and Europe for the winter schedule which starts in November.”

“It is disappointing that Ryanair has now decided to withdraw operations from the entire Northern Ireland market at the end of October, having variously had a presence in all three local airports in recent years,” a spokesperson for Belfast International said.

“It has been a difficult period for aviation and a time when consumers need some stability and faith in the Northern Ireland air transport network.”

Ryanair has long lobbied for APD—a tax on all passenger flights from UK airports—to be removed or reduced. Group CEO Michael O’Leary in June called for the tax to be suspended for two to three years until traffic levels return to pre-pandemic levels.

The tax on short-haul flights currently stands at a minimum £13 ($18) per passenger departing from a UK airport and £82 on long-haul flights. Airlines operating to airports in Northern Ireland are therefore subject to the tax, in contrast to the Republic of Ireland, which scrapped passenger tax eight years ago.

Flights from Belfast International will cease by Oct. 30, ending service to Alicante, Gdansk (GDN), Krakow (KRK), Malaga, Milan Bergamo and Nowy Dwor (WMI). However, the airport said as it has been “anticipating such a move,” it has been engaging with its existing partners and new carriers to provide continuity on the routes to be vacated by Ryanair.

“To this end we hope to be able to make announcements regarding fresh route development in the near future,” a spokesperson added.

Analysis of OAG data reveals that two of the six routes from Belfast International are currently served by other carriers, with easyJet already flying to Alicante and Malaga and Jet2.com planning to add flights to the two Spanish destinations in September. From Belfast City, Vueling offers flights to Barcelona but the other seven destinations Ryanair is ending are unserved.