British Airways is exploring the possibility of replacing its short-haul operation at London Gatwick (LGW) with a new low-cost subsidiary, which would run alongside its long-haul network from the airport.

The carrier suspended flights from the UK’s second-largest airport on April 1, 2020 as the COVID-19 crisis deepened and in May last year warned that flights may not return. Since then, some long-haul services have resumed to the likes of Antigua (ANU), Cancun (CUN) and Montego Bay (MBJ), but BA’s domestic and European network from the airport remains on hold.

BA has now confirmed it is working with unions on the proposals for a new carrier, which were first reported by the Wall Street Journal. In an internal letter to staff, seen by the PA news agency, the oneworld alliance member said it requires a “competitive operating model” to run a sustainable airline in the current environment.

“Because of that, we are proposing a new operating subsidiary to run alongside our existing long-haul Gatwick operation, to serve short-haul routes to/from Gatwick from summer 2022,” the letter said. “This will help us to be both agile and competitive, allowing us to build a sustainable short-haul presence at Gatwick over time.”

The British Airline Pilots’ Association (BALPA), a trade union that represents more than 10,000 pilots, said it “cautiously welcomes” BA’s decision to restart short-haul operations at LGW and “create a number of much needed new pilot jobs.”

“BALPA and BA are in the final stages of negotiations over the revised pay and conditions for Gatwick-based BA pilots and we hope to bring these talks to a conclusion shortly,” BALPA acting general secretary Martin Chalk added.

According to data provided by OAG Schedules Analyser, BA operated 74 routes from LGW in 2019 offering more than 4.4 million seats across 24,942 flight departures. The airline accounted for almost 17% of capacity from the airport during the year and nearly one-fifth of all flights. However, it had direct competition on three-quarters of the routes from one or more rival carriers.

Looking specifically at BA’s short-haul routes, the airline deployed the most capacity on flights to Jersey (JER) in the Channel Islands, offering a total of 469,702 two-way seats. The Spanish city of Malaga (AGP) was the second-largest route by capacity with 365,780 seats, and Glasgow (GLA) was third, with 359,118 seats. Venice (VCE) and Edinburgh (EDI) completed the top five, with 354,030 and 344,652 available seats respectively.

BA’s European and North African network from LGW in 2019: 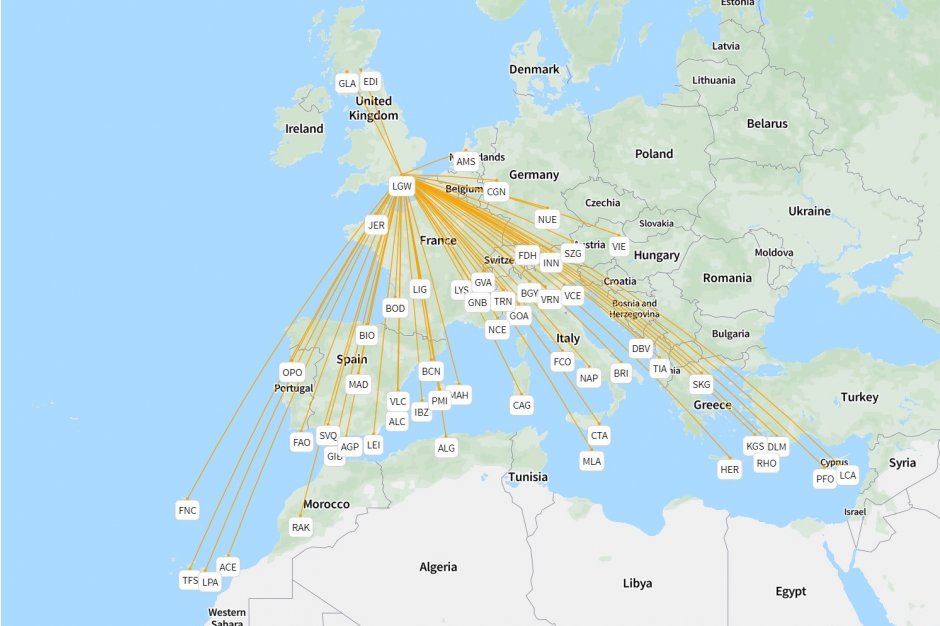 During the week commencing Aug. 23, 2021, BA is offering five long-haul routes from Gatwick to Antigua, Kingston (KIN) and Montego Bay in Jamaica, Mauritius (MRU) and Hewanorra (UVF) in St Lucia.

According to the latest schedules, BA intends to resume service to Glasgow on Sept. 20, operating daily, and Orlando (MCO) and Tampa (TPA) from Sept. 27. Las Vegas (LAX) is listed as resuming on Sept. 28 and Punta Cana (PUJ) on Oct. 3.

The carrier has also filed tentative schedules for the summer 2022 season. OAG data shows that the airline plans to serve 61 destinations from LGW during the period—30 of which are short-haul routes. Jersey, Malaga and Faro (FAO) are set to be the top three destinations by capacity.

During peak summer 2022, the International Airlines Group carrier expects to be operating about 97,000 weekly departure seats from LGW and more than 500 flight departures.

EasyJet is the dominant airline at LGW in summer 2021, followed by TUI Airways and Vueling. During August, easyJet has provided about 500,000 departure seats on routes from the airport, while TUI has offered 97,000 and Vueling 40,000.

Earlier this week, it emerged that Gatwick has embarked on the procedure to create a full-scale second runway. Parallel to the main runway the airport has a taxiway that can be pressed into service as a secondary runway if the main strip is blocked or out of action because of maintenance.

“While we are currently experiencing low passenger and air traffic volumes due to the global pandemic, we are confident that Gatwick will not only fully recover to previous passenger levels, but has the potential to continue to grow back into one of Europe’s premier airports,” airport CEO Stewart Wingate said Aug. 25.

A public consultation process is now set to begin on plans to bring the Northern Runway into routine use alongside its main runway.