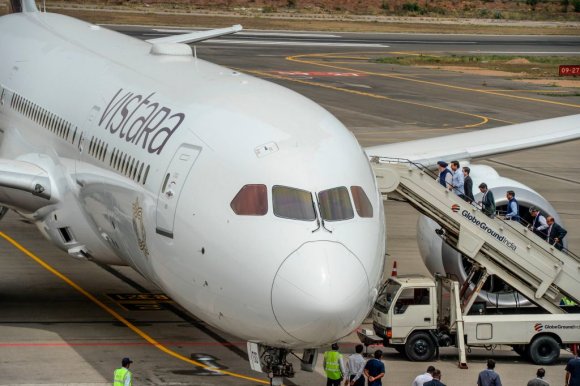 Indian full-service carrier Vistara has secured final authorization to begin scheduled flights between India and the US.

The granting of a foreign air carrier permit will allow the Gurugram-based airline permission to serve “points behind India via India and intermediate points to a point or points in the United States and beyond.” The airline will also be able to carry cargo and operate charter flights.

The US Transportation Department gave tentative approval in June, saying the company is “fit, willing and able” to perform services between the two countries.

Vistara, a joint venture between Tata Sons and Singapore Airlines, is yet to outline its planned US route network but previously indicated that US flights could start as early as September.

The airline primarily operates a fleet of narrowbody aircraft but plans to use its two 299-seat Boeing 787-9s on the proposed US flights. A further five 787-9s are on order.

The range of the 787-9s would allow the carrier to fly nonstop from Delhi (DEL) and Mumbai (BOM) to the likes of New York, Boston and Washington on the US east coast, and San Francisco and Los Angeles on the west coast.

Data provided by Sabre Market Intelligence shows that O&D traffic between India and the US totaled 2.2 million two-way passengers in 2020, down from 5.7 million during the previous 12 months.

Mumbai-New York was the biggest O&D market last year, followed by Delhi-New York and Delhi-San Francisco. Ahmedabad-New York was fourth, despite the absence of nonstop service.