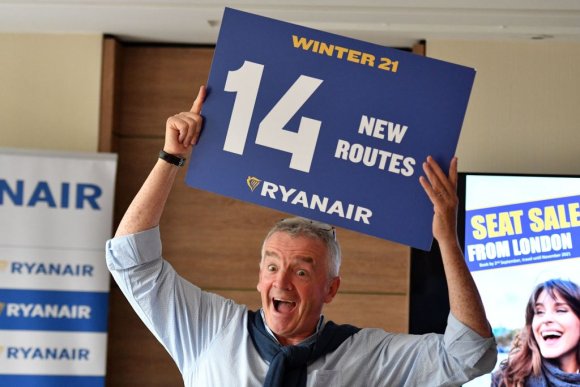 The additions are part of a winter season schedule that will see the ULCC operate a combined 142 routes from the three London airports.

Though Ryanair did not give specific dates for the start of each new route, they are set to begin launching in November.

The carrier will open a winter season route from LGW to Malaga (AGP) in Spain.

From LTN, it will start new routes to: Fuerteventura (FUE) and Gran Canaria (LPA) in the Canary Islands; Grenoble (GNB) in France; Naples (NAP) and Turin (TRN) in Italy; and Shannon (SNN) in Ireland.

He told a recent news conference that the recovery in terms of passenger demand is strong, but flight ticket pricing remains low. “We are selling a lot of cheap seats to recover the market very quickly,” O’Leary said.

The CEO indicated that at least some of the new London routes will be operated with Boeing 737-8200 aircraft, the extra capacity version of the MAX for which Ryanair is the launch customer.

“As Ryanair takes delivery of 55 Boeing 737-8200 ‘gamechanger’ aircraft this winter, we are delighted to announce these 14 new routes from our three London airports in Stansted, Luton and Gatwick,” O’Leary said in a statement. “We will also create over 500 new jobs for pilots, cabin crew and engineers this winter at our London airports as we gear up for more fleet and route growth in 2022.”

O’Leary continued his push to convince the UK government to ease travel restrictions on passengers by asking for COVID-19 tests for fully vaccinated travelers to be dropped. He also called for the suspension of the UK’s air passenger duty, which the ULCC cited as a reason behind its recent exit from Belfast’s airports.

“While Ryanair is committed to its London airports, the lack of government support for aviation and tourism recovery creates further barriers to traffic and growth,” O’Leary added.