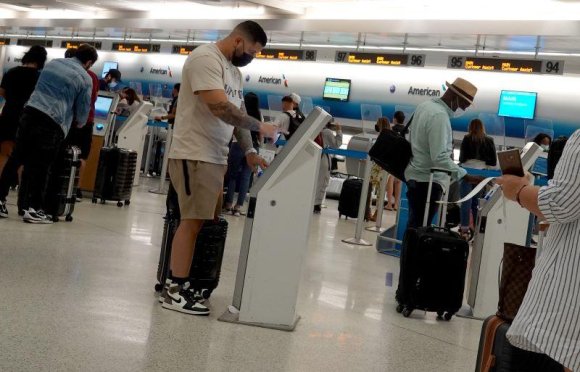 US airlines have warned of softening demand for air travel this fall as the delta variant of COVID-19 continues to create concern among the public, although the country's carriers expect the weakness to subside in time for the winter holiday season.

Chicago-based United Airlines trimmed its capacity for the remainder of the year, and now expects third-quarter available seat-miles (ASMs) to be down 28% versus pre-pandemic 2019 levels. United said it expects the slowdown to be “temporary in nature.”

“We think things can quickly move right back in a positive direction” after the delta variant surge peaks in the US, United CFO Andrew Nocella said at a virtual investor conference hosted by Cowen analyst Helane Becker. “We believe the situation is already stabilizing. It is certainly not getting any worse, and we feel good about the outlook as a result of that.”

Fort Worth-based American Airlines said it is currently operating toward the low end of its capacity guidance of down 10-15% from 2019 levels. Still, American said that load factors for peak travel periods, including the winter holiday season, “remain very strong.”

“We remain encouraged by what we're seeing and hearing from our customers about the future. I think the recovery is just delayed a little,” American chief revenue officer Vasu Raja said. “In fact, even with this uncertainty, our book-to-business for the holidays continues to be very strong.”

Atlanta-based Delta Air Lines expects “a 90-day plus" period before the "next leg up [in business travel] that we were expecting to see, but it’s coming,” according to CEO Ed Bastian. He added Delta has not seen any pullback in business travel: “We’re still in that 40% range [of pre-pandemic business travel levels] that were in the early part of July. It’s up and down a bit, but it is holding pretty steady."

In an investor update, Delta concluded that, while the environment remains choppy, “booking trends have stabilized in the last 10 days, and the recovery is expected to resume as case counts decline.”

Dallas-based Southwest Airlines said in its most recent investor update that the softness in leisure bookings has continued in September and October. Similar to Delta, Southwest believes the effect on bookings from the spike in COVID-19 cases will be shorter than during earlier stages of the pandemic. “While the duration of the negative effects to operating revenues is unknown, impacts experienced thus far, and currently estimated through October 2021, are less severe than prior waves of COVID-19 cases,” Southwest said.

Robert Jordan, Southwest's incoming CEO, said during the Cowen conference that the company is continuing to see “more of an impact from the delta variant than we had thought … We’re all hopeful that we have bottomed out in terms of the impact.”

New York-based JetBlue Airways said it is foresees weakness in demand extending into the fourth quarter, although management expects leisure demand for peak holiday travel “will hold up relatively well.”

Denver-based ULCC Frontier Airlines was the first US carrier to lower its guidance because of the delta variant. “I think it got a little worse than we expected,” CEO Barry Biffle said. But as Frontier “looks out over the next few weeks, we’re pretty optimistic with hospitalizations and the cases coming down in states that were hit early,” he added.

"As we’ve seen in the past, once the cases and hospitalizations subside, I think we’ll be back off to the races again," Biffle said.