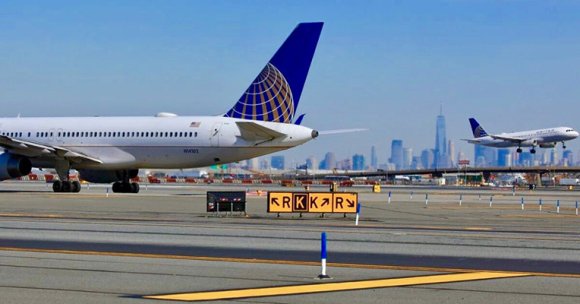 The US Transportation Department (DOT) plans to award the rights for several peak flights in Newark Liberty International (EWR) to a low-cost or ultra-low-cost carrier to spur competition and reduce fares.

The 16 takeoff and landing slots were previously used by Southwest Airlines until November 2019, when the carrier pulled out of Newark in order to consolidate its New York metropolitan area operations at LaGuardia (LGA).

The airline had been handed 36 slots in 2010 as a condition of United Airlines’ merger with Continental. Although Newark is no longer slot-controlled, it remains “schedule facilitated” in order to ensure the efficient use of the airspace.

While the FAA reallocated 20 of Southwest’s former off-peak slots, it declined to reissue 16 of them that were in peak afternoon and evening hours, saying this would cut congestion at the New Jersey airport and reduce delays.

However, the decision prompted a challenge from Spirit Airlines, which claimed the agency had failed to consider the effect of its decision on competition.

In May, a ruling by the US Court of Appeals for the D.C. Circuit found that the FAA acted improperly and remanded the matter to the agency to address the issue of competition.

The court questioned why the FAA did not discuss “why it prefers miniscule reductions in delay more than competition that could lower fares for passengers.”

It also cautioned that if the FAA again decides to retire the peak-period slots, it should be “prepared to provide a reasoned explanation for preferring to cut travel time an average of one minute rather than to cut the price of flying by as much as 45% on routes that would gain a second carrier.”

In a statement issued on Sept. 16, the US Justice Department applauded the DOT’s decision to reallocate the Newark slots to an LCC or ULCC. Acting assistant attorney general Richard A. Powers welcomed the efforts to preserve competition at the airport.

“Competition in the airline industry–and at Newark airport in particular–is in critically short supply,” he said. “Low-cost carriers play an important role in keeping the airline industry competitive and the immense power of the major airlines in check.

“We look forward to working with the Department of Transportation to address similar concerns at capacity-constrained airports, and to bring consumers more choices and lower prices.”

According to data provided by OAG Schedules Analyser for September 2021, United Airlines has a 59.2% capacity share of seats from Newark, followed by JetBlue Airways on 13.8%. Spirit is the third-largest carrier at the airport with a 6.1% capacity share. JetBlue has already confirmed that it plans to apply for the newly available slots.

Meanwhile, in a separate ruling, the DOT is extending temporary waivers of minimum flight requirements through late March 2022 for international routes.

“The Department finds that extension of the temporary blanket relief from these conditions is in the public interest, and that it will continue to serve the public interest to afford air carriers flexibility to begin or resume their international services as market conditions warrant, without risk that they will lose their route or frequency awards for non-use,” a filing published by the DOT said.

The extension, which was granted at the request of Airlines for America, covers the IATA northern winter season until March 26, 2022. The DOT said that any rights not in use as of March 27 will be returned.

However, it added: “The Department recognizes that specific cases may call for relief going beyond that which we have deemed justified on a blanket basis in the current circumstances. In this regard, air carriers may seek further extension of the waiver beyond March 26, 2022, for specific city-pair limited entry services where they can demonstrate that circumstances warrant.”

US airlines were given temporary blanket relief from startup and dormancy conditions on certain international services at the onset of the COVID-19 crisis in March 2020 amid the dramatic drop in traffic.