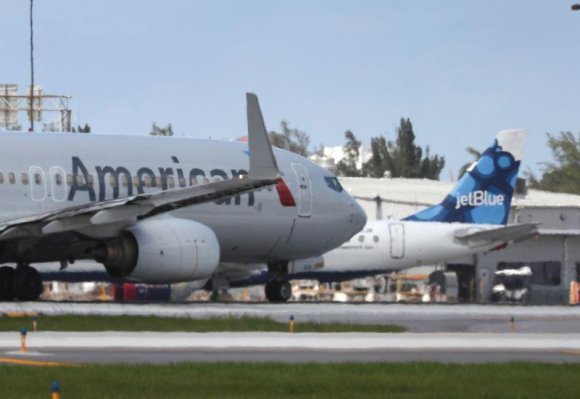 US Sen. Richard Blumenthal (D-Connecticut) became the latest figure to question the American Airlines-JetBlue Airways Northeast Alliance (NEA), urging the US Department of Transportation (DOT) to again review the tie-up.

The NEA was approved in January 2021 by outgoing Transportation Secretary Elaine Chao. The two airlines were granted the ability to coordinate their schedules at Boston Logan (BOS), New York Kennedy (JFK) and New York LaGuardia (LGA) airports. The carriers pledged the partnership would enable them to codeshare on 486 daily flights to 120 nonstop destinations.

The arrangement has generated pushback over its potential for increased consolidation, particularly among smaller carriers and ULCCs. Spirit Airlines, for example, said in a petition filed in July that the partnership—taken together with American’s partnership with Alaska Airlines on the West Coast—created an unacceptable level of overlap between the two alliances.

Spirit, Eastern Airlines and others have urged the DOT to institute an on-the-record proceeding with opportunity for public comments to address the competitive merits of the arrangement—a step that was not taken before the department approved the tie-up in January. Current Transportation Secretary Pete Buttigieg, while voicing his strong support for a competitive airline industry, has not publicly endorsed the idea of revisiting the NEA.

In a letter to Buttigieg, Blumenthal urged the DOT to conduct “a full public interest review” of the NEA. He also cited “troublesome concentration in the airline industry” caused by previous regulatory proceedings and large mergers that allowed dominant carriers to “box out smaller competitors.”

“The Trump DOT’s decision to terminate its informal review of the joint venture between JetBlue and American was pushed through with only 10 days remaining in the administration, without adequately airing the competitive issues raised by the agreement not to compete between two major airlines,” Blumenthal wrote. “What is more, in a highly unusual move, the department did not afford the public and other industry participants any opportunity to comment on the competitive implications of this agreement.”

American and JetBlue have defended their partnership as a means to enhance connectivity, increase service and provide a viable third competitor to Delta Air Lines and United Airlines in the US northeast. The carriers have argued that the DOT’s review was thorough and that a full public interest review is not necessary given the scope of the alliance.

“For years and years, American had a declining share of originating New York and Boston customers,” American revenue chief Vasu Raja explained at a recent investor conference hosted by Cowen & Co. “Now we're seeing that start to change, especially as we look out into the fourth-quarter and people are starting to fly back in greater numbers.”