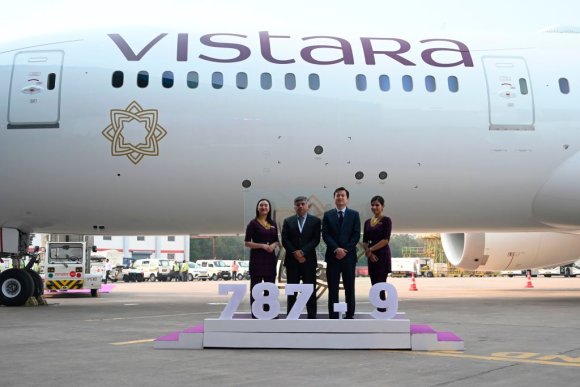 The Gurugram-based carrier intends to launch a twice weekly service from Delhi (DEL) on Nov. 7 under a bilateral transport bubble agreement between India and France. Flights will be onboard Boeing 787-9 aircraft, operating on Wednesdays and Sundays.

Vistara—a joint-venture airline between Tata Sons and Singapore Airlines—opened its first European route in August 2020, flying between Delhi and London Heathrow (LHR). Service between Delhi and Frankfurt (FRA) started in February this year.

Sabre Market Intelligence data shows that Delhi-Paris was the largest city pair between India and France in 2019. Two-way O&D traffic totaling almost 194,000 passengers. About 42% of passengers traveled nonstop between the destinations during the year, with Abu Dhabi and Dubai the largest connecting markets.

Earlier this month, the carrier confirmed that Leslie Thng (pictured second right) will depart the business at the end of 2021 after more than four years in charge to take up a role at Singapore Airlines. CCO Vinod Kannan has been named as his replacement and will assume the CEO position from Jan. 1, 2022.