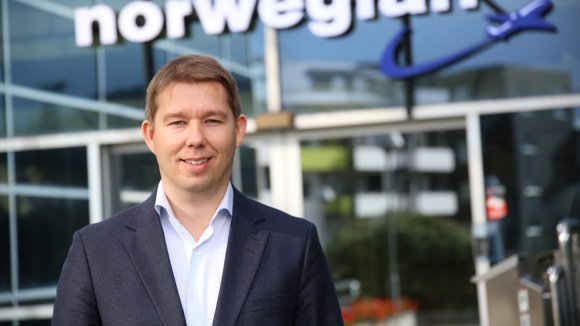 Norwegian has promoted Magnus Thome Maursund (pictured) to EVP of network, pricing and optimization. He has been with the carrier for more than a decade and will assume the new position on Oct. 1.

“I am pleased to welcome Magnus Thome Maursund into the management team of Norwegian. His analytical skills, extensive aviation experience and personal style will be highly valued in the entire organisation,” Norwegian CEO Geir Karlsen said.

Maursund joined Norwegian in 2007 as a revenue analyst. He has since held several positions within revenue management, short-haul route planning, charter and airline partnerships. He comes from the position as SVP commercial short-haul.

“The challenges ahead are truly exciting, in a time where the entire aviation industry will continuously change and develop following the pandemic,” Maursund said.

Andrew Hodges—who has been Norwegian’s SVP of network strategy and planning since June 2019—is joining Norse Atlantic Airways. He is one of three new senior appointments the transatlantic startup has made.

Hodges, who spent more than 12 years at easyJet before joining Norwegian in 2019, has been named CCO at Norse Atlantic.

Adrian Keating will also take up the role of VP of sales, marketing and distribution. He is currently commercial director UK and Ireland for Air Transat and previously worked for British Airways, easyJet and Etihad.

The third appointment is Kamal Lad, who has been appointed VP of network and revenue management. He joined Norse Atlantic in July having been head of commercial long-haul at Norwegian. Prior to that, Lad worked for Etihad, Finnair and easyJet.

Dodd is currently VP of loyalty partnerships at hospitality company Accor and will join the Brisbane (BNE) team in October when he relocates from Sydney.

Prior to joining Accor, he spent six years with American Airlines as general manager Australia and New Zealand sales, and was responsible for the commercial launch of online service from Sydney (SYD) to Los Angeles (LAX) and Auckland (AKL) to LAX.

“The appointment of Simon will further strengthen our existing relationships with airlines and industry partners, and position Brisbane Airport well for recovery by identifying and securing future airline capacity and new markets,” Parashos said.

Trevor Campbell has joined Melbourne Airport (MEL) as VP of airline business development after relocating back to Australia.

He moves after more than five years with the Vancouver Airport Authority in Canada, where he was latterly manager of air service development and partnerships. Prior to that, Campbell worked for Tourism Vancouver to promote the destination across the Americas.

During his time at the Vancouver Airport Authority, Vancouver International (YVR) was named Overall Winner at the World Routes Marketing Awards in 2017.

As part of a reorganization, LBA’s former commercial director John Cunliffe will now hold the role of commercial and strategy director. He joined the airport in 2018 having previously worked for easyJet and Emirates.

Vincent Hodder, CEO of LBA, said: “LBA has been significantly impacted by the pandemic and as we start to see early shoots of recovery in the travel industry, now is the time to invest in the right team to make LBA a truly outstanding regional airport for the future.”

Do you have an appointments story to share? Get in touch with your latest people news.