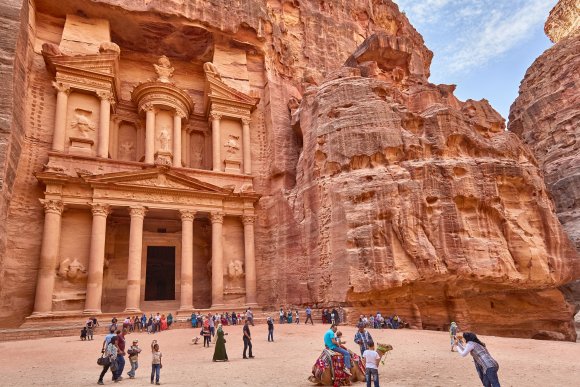 Wizz Air will launch its first routes to Jordan after signing an agreement with the kingdom to begin four year-round services to Amman and four seasonal flights to Aqaba.

Jordan Tourism Board hopes the eight new routes will further stimulate the nation’s tourism sector, bringing about 167,000 additional travelers into the country during the first year of operation. Tourism attractions include the world-renowned archaeological site Petra (pictured).

According to the government body, the Hungarian ULCC intends to launch flights to Jordan on Dec. 15.

Speaking at a press conference, Jordan Tourism Board MD Abed AlRazzaq Arabiyat said the country was working to increase low-cost penetration and attract new charter flights to help the tourism sector recover from the impacts of the pandemic.

Data provided by OAG Schedules Analyser shows that the number of low-cost seats in Jordan’s market has steadily increased in recent years. During October 2021, LCCs account for 17.1% of all departure seats, compared with 15% during the same month two years ago.

Ryanair is currently the country’s largest provider of low-cost seats, followed by Pegasus Airlines and Flynas.

Should Wizz launch the eight routes as planned, it will face competition with Ryanair in all four markets from Amman on a city-pair basis, as well as with Royal Jordanian from Amman to Rome and Austrian Airlines from Amman to Vienna.

Ryanair will also offer competition between Aqaba and Rome.

Separately, Wizz has announced it carried almost 3 million passengers in September 2021—up by 91.3% on the same month in 2020. The carrier’s load factor last month was 78.4%.