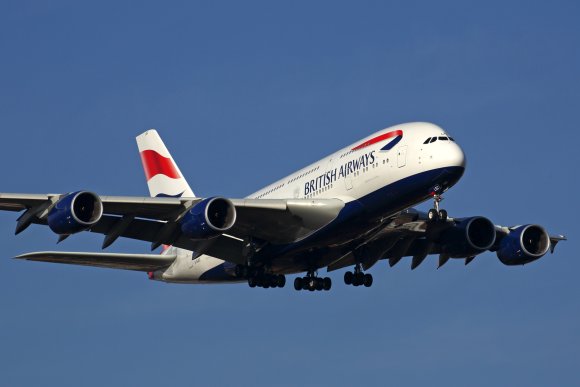 British Airways (BA) is bringing the Airbus A380 back into its network “earlier than expected,” with three long-haul routes initially getting the extra-large aircraft.

BA has 12 A380s in its fleet. An initial four will be brought back into the flying rotation. After being flown on short-haul routes briefly to refamiliarize BA crews with the aircraft, BA says it will place the A380 on the London Heathrow (LHR)-Los Angeles (LAX) and LHR-Miami (MIA) routes in November.

The aircraft will then be deployed on the LHR-Dubai (DXB) route in December.

BA’s A380s are configured with 469 seats in four classes.

“News that the airline’s A380 aircraft is re-joining its fleet follows the announcement that vaccinated Brits will be able to travel to the United States from November,” BA said in a statement. “The airline is set to fly to 23 US airports this winter, with up to 246 flights a week, more than any other transatlantic carrier.”

“This is an exciting time for British Airways and our customers as we see borders reopening,” BA director of network and alliances Neil Chernoff said. “With welcome news from the US, we are dramatically increasing flights and [adding] some of our A380s to give our customers as many options as possible.”