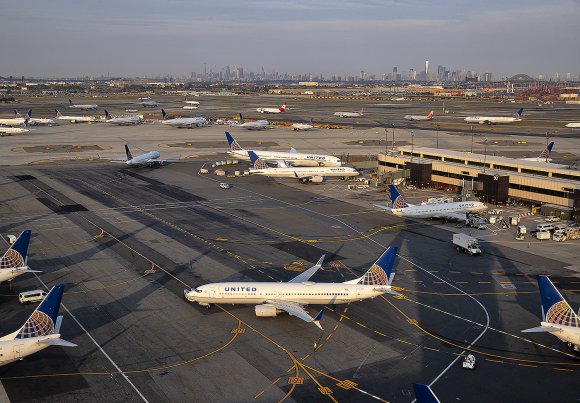 United Airlines pushed back against a proposal from the US Transportation Department (DOT) to reassign eight peak-time daily slot pairs at Newark (EWR) to an LCC or ULCC, arguing that doing so would exacerbate congestion at the airport.

The 16 take-off and landing slots were vacated by Southwest Airlines when it exited EWR in November 2019 as part of an effort to consolidate service at nearby New York LaGuardia (LGA). The slots were initially acquired by Southwest in 2010 as part of a batch of 18 slot pairs divested by United and Continental Airlines as part of their merger. While the US FAA has reallocated 10 of those slot pairs, it declined to issue the remaining eight after it determined that doing so would increase congestion at slot-constrained EWR.

That decision, however, prompted a challenge from Spirit Airlines, which claimed the DOT failed to consider the effect of leaving the slots vacant on competition at EWR. A federal court sided with Spirit in May, ruling that the FAA acted improperly and remanded the matter to the agency to address the issue of competition. As a result, the FAA decided to award the slots to one or more LCCs or ULCCs in September, a decision that was applauded by discount operators and the US Department of Justice (DOJ).

But the decision was not applauded by United, which operates a hub at EWR and is by far the largest carrier there. The Chicago-based company said in comments submitted to the DOT that awarding the eight vacant slot pairs will exacerbate congestion at EWR, which it described as the “the chronically worst performing airport in the US from an air traffic congestion and delay perspective.”

In its written submission to the DOT, United rattled off a list of statistics that emphasize the strain caused by congestion on operations at EWR. For example, United said the airport was the most delayed US airport in each of the last four years, as well as the most delayed airport in nine of the last 12 years. In 2019, EWR’s on-time arrival rate of 68.3% was the worst of any large airport in the country. During that summer, the last before the start of the COVID-19 pandemic, over one fifth of EWR’s operations were impacted by ground delays on 60 of 90 days in the peak summer season.

“United submits that congestion, not competition, is the fundamental challenge affecting consumers at EWR, and that congestion mitigation should be the government’s primary objective there,” the company argued. “We believe that delay reduction and improved congestion management are at least as important, if not more urgent, than actions to marginally increase competition in an already highly competitive market.”

Moreover, United argued that the New York City metro area—which is served by EWR, New York Kennedy (JFK) and LGA—already enjoys “robust” competition. While United dominates EWR—having transported nearly 60% of passengers to and from the airport in the 12 months ending June 2021—the carrier said that DOT neglected to include the other two New York City-area airports in its competitive analysis. Additionally, the DOT did not consider the benefits made possible by United’s strong EWR hub in terms of increased connectivity.

United also said it has limited its own flying at EWR during peak hours in recent years to bring the airport closer into line with its peak-hour cap of 79 aircraft movements. From a commercial standpoint, the carrier said it wants to add additional flights at the airport but cannot do so “because the airfield could not accommodate the increased movements without creating significant disruptions.”

“United has worked closely and collaboratively with the FAA for many years to help mitigate delays and manage congestion at EWR,” the company said. “It is ironic that the [DOT] assumes that United’s commitment to EWR is insidious and that its service is potentially anti-competitive."