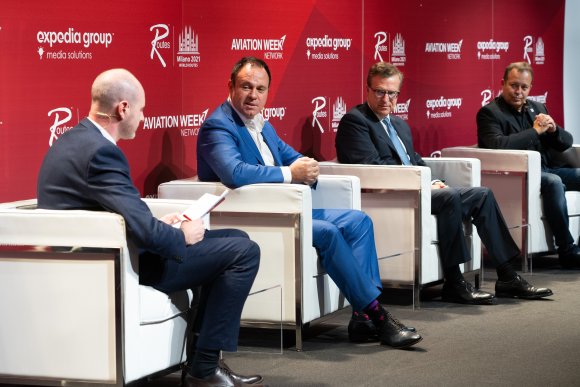 Network planning in the immediate wake of COVID-19 will involve “a huge element of gazing at crystal balls,” the CEO of Saudi Arabian LCC Flyadeal has told World Routes 2021.

Con Korfiatis said that for many airlines, historical patterns are less relevant. In-market testing of services has become the most reliable barometer of success.

“Some new city pairs have done really well, others have not,” said Korfiatis. “It’s up to us now to work out why.”

Fellow panelist Aurigny Air Services CEO Nico Bezuidenhout agreed, saying airlines “have no hindsight and no history to rely on” when it comes to planning new services.

“We rely more on polling our customers and real-time feedback,” he said.

With a lack of reliable data to make network planning decisions, Korfiatis said meeting airports and tourism authorities is more important when working out where to place new services.

Flyadeal is undergoing a “very aggressive growth phase” and plans to double in size within the next 12 months.

“We want to add more international destinations and we’re here at World Routes to understand those opportunities,” he said. “We have an idea in mind of where we want to go, but the hard work is in working that out in real time.”

Additionally, Korfiatis said that he expected Flyadeal and other airlines to be “as aggressive as you like” when negotiating with airports for new services, as “all airlines want things as cheap as we can get it.”

“There is always a tug of war between airports and airlines, in good times and in COVID times,” he said. “No one has come out of this banking the money and now it’s about who can withstand the most pain.”

However, Bezuidenhout said that Aurigny—which has added service to European destinations such as Barcelona, Amsterdam and Madrid among others which are “proving profitable”—has received “a lot of support” from its airport partners and reaching fair agreements was vital.

“The value chain in aviation has been decimated,” said Bezuidenhout. “All parts of the value chain need to moderate their expectations in the recovery.”

He added that keeping hold of airport slots was going to be a huge priority for Aurigny in the future. The large financial sector in its home island of Guernsey means that the airline “has to protect our Gatwick (LGW) slots almost at any cost.”

John Thomas, the CEO of Waltzing Matilda Aviation and the recently launched Connect Airlines, said that the extension of the slot waiver program is “a form of quasi-protectionism.”

The carrier is launching services from Billy Bishop (YTZ) in Toronto. Thomas said its business model is to take “a couple of percent of Toronto Pearson’s business and that will fill our planes.”

“We’re looking at New York, and there are cities such as Detroit, Cincinnati and Charlotte that we think will be better served flying into Billy Bishop.”