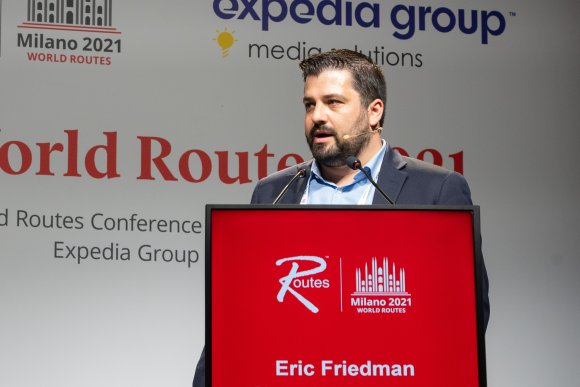 JetBlue believes that its incoming fleet of Airbus A321LR and XLR jets will make opportunities in unserved and underserved European markets available that “aren’t viable with widebody economics.”

The carrier, which recently launched its first transatlantic services to London in Gatwick and Heathrow, said it was actively exploring new opportunities in Europe at World Routes 2021.

However, it would not be “opening new transatlantic routes for the sake of it,” JetBlue’s director of network planning Eric Friedman (pictured) told delegates at the event on Oct. 10.

The airline’s Mint business-class product would be core to the success of any routes the carrier will consider into Europe.

“We have to fill those 24 seats in Mint,” he said. “The XLR creates unique opportunities that at first appear risky—we need airports who will share that risk with us.”

JetBlue has also “adapted to pandemic” economics and become more experimental with its route planning thanks to the CARES Act, Friedman said.

“The CARES Act means lots of our fixed cost are covered, so with all those aircraft we had sitting on the ground we could try new routes without much extra cost.”

“We launched 150 new routes, flexing our network in response to demand and travel restrictions. Some of these were long-term strategic routes, which we accelerated during the pandemic.

“Others were tactical moves intended to generate cash flow. Not all of those will are going to be permanent. Some of them are temporary, this was a period of experimentation.”