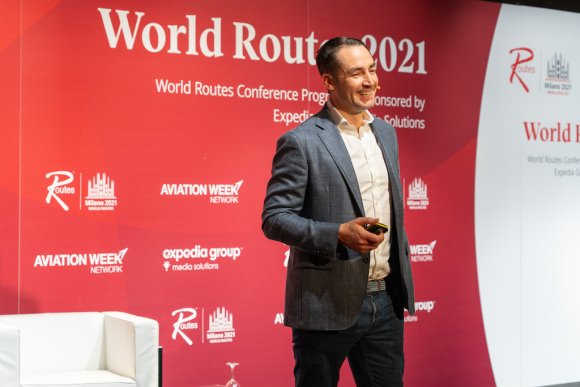 Ryanair is accelerating its growth plans and has aircraft available to place from winter 2022 as it looks to hit a 20-25% market share across Europe over the next five years.

“We have an awful lot of work still to do in Europe. Currently, our market share in Europe is about 15%. We'll probably get to 20-25% in Europe within the next five years, so we're very much focused on inter-European travel,” Ryanair commercial director Jason McGuiness told delegates at World Routes on Oct. 11.

Ryanair is aiming to carry 165 million passengers in 2022, which is 10% more than its 150 million pre-COVID target. Over the past 12 months, the Irish LCC has opened 14 new bases, with a new three-aircraft base at Venice set to open in summer 2022.

Ryanair is looking to strike long-term deals with airports, as it seeks to place its new Boeing 737-8200s. By 2025, Ryanair will offer operate a fleet of over 620 aircraft, carrying 225 million passengers annually.

McGuiness said Ryanair is seeking looking to find bases for its new aircraft from winter 2022 onwards. “We’ve placed the majority of our aircraft for summer '22, but I'm always open to proposals. So, if it's a very good proposal it can be summer 2022,” he said.

World Routes 2021 host country Italy could be on track to receive some more Ryanair aircraft, but this is conditional on tax changes.

“We've increased from 60 to 90 based aircraft [in Italy]. We have sent the Italian government a plan that will add an additional 40 aircraft if they'll remove their municipal tax,” McGuiness said.