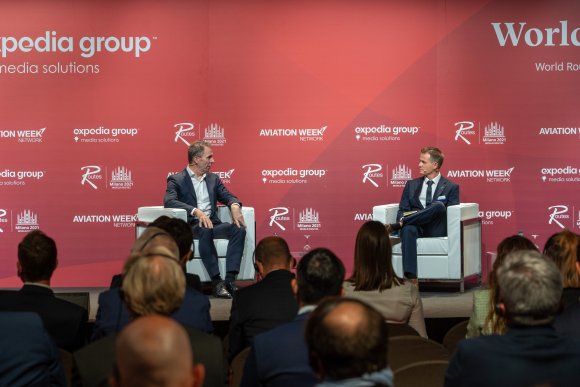 Wizz Air is mulling the launch of new subsidiaries as part of an ambitious expansion strategy that will see the Hungarian carrier become four times larger than it is today by 2030.

Speaking at World Routes 2021 in Milan on Oct. 11, CEO József Váradi explained that the airline was open to setting up more units in order to access new markets, saying that startup Wizz Air Abu Dhabi is serving as a test case.

“We’re going to be doubling the business in the next five years and doubling again in the following five years,” Váradi said.

“So, in 2030 we should be a four-times bigger business than what we are today. That means we could be present in more geographies, with more subsidiaries and more AOCs.”

Although he would not be drawn on potential destinations, Váradi disclosed that the ULCC could be active in several markets. He said the move was part of a drive to increase Wizz’s annual passenger numbers to 170 million and its fleet to 500 aircraft within 10 years.

“When we are talking about new subsidiaries, obviously that means that they are out of the open market and this is the way to assess such markets,” Váradi added. “Wizz Abu Dhabi serves as a sample case for creating subsidies in bilateral markets and we are assessing some of those opportunities.”

Wizz currently has 235 aircraft on order, according to CAPA Fleet Database, including 20 Airbus A321XLRs. Váradi said the fleet expansion would allow the carrier to connect more points within its existing network, as well as venturing further east. However, he ruled out transatlantic operations.

Váradi also refused to be drawn on recent speculation that easyJet had rejected a takeover offer from Wizz, but he admitted that consolidation of some form “needs to happen” in Europe and LCCs like Wizz will be the frontrunners when it comes to grabbing market opportunities.

“We are not designed to become a consolidator… but at the same time we are not going to be blind in the marketplace,” Váradi said.

In a wide-ranging interview, the Wizz CEO was highly critical of the European Commission’s decision to set the continent’s minimum slot-use threshold at 50% for the upcoming 2021/22 winter season.

Slot rules governed by the EC normally require airlines to utilize at least 80% of their slots at European airports or risk losing them. However, the EC implemented a waiver in 2020 to provide greater flexibility for carriers that would otherwise be forced to operate “ghost flights” to keep their slots.

“The Commission is completely wrong on slot allocation,” Váradi said. “The original slot rules must be reinstated as of the summer season.

“Wizz Air was operating 103% of its 2019 capacity over the last few months. I’m sorry but why should I be responsible for the weaknesses of incumbent carriers? They are unable to ramp-up and they are too high cost, but that’s not my problem.”

Váradi was also critical of the amount of European government aid provided to flag-carriers since the COVID crisis began. He said governments should “stay out of the industry and just focus on being a rational market regulator.”