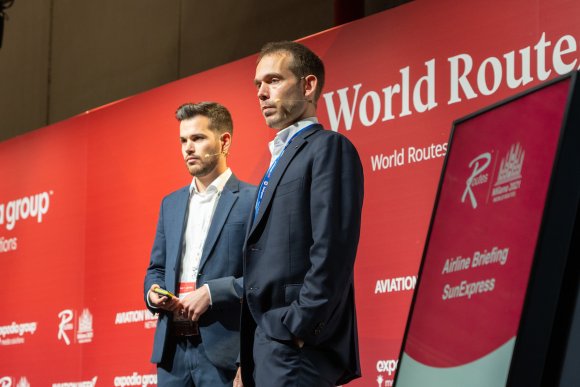 Lufthansa and Turkish Airlines joint-venture carrier SunExpress is on the lookout for new airline partners as it seeks to expand in Central and Eastern Europe.

“We have used the time during the pandemic to invest in partnerships,” SunExpress head of network planning and scheduling Wilken Bellmann told delegates at World Routes 2021 in Milan. “We are fully open, if it's a non-competing airline, to partner based on interline or codeshare.”

For the past three years, Antalya-based SunExpress has been codesharing with Lufthansa on flights to Frankfurt and Munich. SunExpress already interlines with United Airlines and a new Air Canada interline will go live soon. Separately, SunExpress has a partnership with EgyptAir carrier Air Cairo, taking on full commercial management for some of the Egyptian carrier’s aircraft.

“We sell, we revenue manage, we plan and we schedule those flights under a commercial model that we agreed with them. And more partnerships are to come. This is something that we see as an important pillar to go forward,” Bellmann said.

Over the next three years, SunExpress will take delivery of 19 Boeing 737 MAX and the carrier is looking for market opportunities. SunExpress is currently operating a fleet of 38 aircraft—up from 33 pre-COVID. Nine more will arrive this winter, taking it to 47 aircraft for summer 2022.

SunExpress also sees strong growth potential in Central and Eastern Europe for additional frequencies in existing markets and new destinations, as well as further opportunities in its core Western Europe and Scandinavia markets.

Airports must provide data that demonstrates VFR and tourism potential, as well as a sizeable catchment area, Bellmann said. “We start with bigger markets, especially if it's a new-country market,” Bellmann said, “then we scale down to second-tier, third-tier airports as well.”