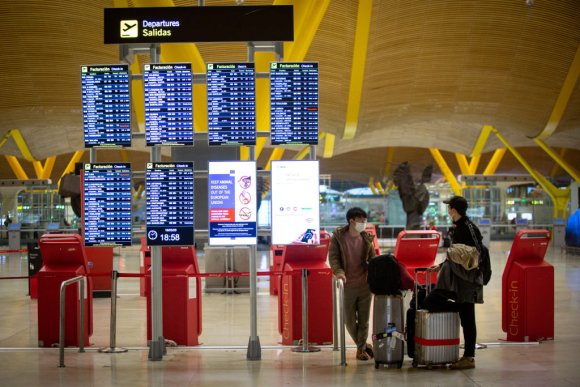 The airport serving Spain’s capital city, Adolfo Suárez Madrid-Barajas (MAD), may be on the cusp of a major promotion in European rankings.

International Airlines Group (IAG)— which owns Spanish carriers Iberia, Vueling and Level, as well as British Airways and Aer Lingus—has plans to increase its presence in the South American and Caribbean markets through the acquisition of Air Europa. MAD is already the main gateway to Latin America from Europe, with a 25.8% market share.

So, how is the airport shaping up for such a future? In 2019 Aena, the Spanish state-owned company that manages 46 airports and two heliports around the country, announced plans to expand and renovate Madrid-Barajas’ exist­ing terminals, increasing their yearly capacity from 70 million passengers to 80 million.

Ensuring MAD’s infrastructure remains competitive and grows sus­tainably will involve a total estimated investment of €1.69 billion ($2 billion) over the 2025-2029 period.

“The main actions planned by Aena are the expansion of T4 to increase the check-in capacity with about 100 additional counters, for which it is necessary to expand its central core,” airport director José Antonio Álvarez said. “The north pier will be extended by 300 m (984 ft.), providing it with a boarding area and new contact gates.”

There will also be investment in the automated baggage handling system for T4/T4S.

“Also planned is the enlargement of T4S, extending the north pier by some 400 m, providing it with new board­ing gates capable of accommodating widebody aircraft, and the enlargement of the aprons with new positions (T4 and T4S), as well as the taxiways and new apron accesses,” Álvarez said. “To this must be added the extension of the parking lot and the remodeling of the roadways.”

Naturally, the COVID pandemic has had an adverse effect on the airport. Traffic fell by more than 70% in 2020. Aena put in place a raft of initiatives in response to the slump in business, with three goals in mind: ensuring the smooth operation of its airports by tailoring capacity to demand; keeping an eye on liquidity with a cost-savings plan to protect cash flow and credit facilities; and protecting its staff by enabling non-face-to-face working practices and implementing health and safety measures in jobs that have to be done in person because they are essential.

Neither the airport nor Aena has undertaken any employment restruc­turing, Álvarez said.

“Aena’s priority is, and has always been, to protect the health of employ­ees and passengers alike while taking into consideration the recommenda­tions of the health authorities and the operational needs of the company,” he said. “Since the onset of the pandemic and following the recommendations of the health authorities, a 50% hybrid system has been in place in which teleworking alternates with face-to-face work. This has mainly impacted normal working day staff as many of the jobs involved in routine airport operations have had to continue with their usual roles so as to keep the airports operational.

“As far as infrastructure is con­cerned, all the airport’s terminals have been operational since 1 July. At no time has the airfield (runways and taxiways) been left inoperative with two objectives: to allow airlines to maintain their traffic rights and to be ready for recovery.”

In preparation for that recovery, Aena made use of the months with less traffic to take several actions. The company has refurbished terminal floors, boarding gates and check-in desks; fitted new passenger boarding bridges; and enlarged some boarding areas and security checkpoints.

Passenger numbers at Madrid-Bara­jas dropped from 61 million in 2019 to 17 million in 2020. The major European airlines are confident that demand will increase in the second part of 2021’s summer season, Álvarez said, but it remains difficult to accurately forecast traffic figures in the coming months as airlines are continuing to modify their operations in the light of changing national travel restrictions.

Traffic data for July show that MAD recorded more than 2.5 million passengers. Eurocontrol figures also show that the airport’s average number of daily operations placed it among the top four in Europe in the first six months of 2021.

“These figures are still a long way off 2019 levels, but at all events the impor­tant thing is that the airport is ready to continue welcoming the recovery of traffic,” Álvarez said.

Much will depend on the progress of vaccination rollouts. The European Union introduced its Digital COVID-19 Certificate at the start of July, easing travel within the bloc for vac­cinated citizens.

Like all airports, Madrid-Barajas is keen to attract new carriers. One of the most recent is World2fly, which began operations at the airport in June with flights to Caribbean destinations. Iberojet also launched a new route to Costa Rica in July.

“Aena is maintaining and actively working on the recovery of air traffic with the implementation of an incentive scheme to assist with airline schedul­ing and route development,” Álvarez said. “Specifically, for the current sum­mer season the incentive is associated with the recovery of airline operations in relation to the number of opera­tions performed by the airline during the equivalent month in the 2019 summer season.

“This involves a reduction in the landing charge by the same recov­ery percentage the airline achieves, provided that it is above 30% of operations in April, May and June, and 45% in July, August, September and October.”

As with other airports, interna­tional traffic is recovering more slowly at MAD than European and domestic traffic as it is more closely tied to the COVID-inspired restric­tions on travel.

In addition to being the main gate­way to Latin America from Europe, Madrid-Barajas also has significant connections with Asia, mainly China, as well as the Middle East. The airport currently has 57 intercontinental destinations: 33 within the Americas, 12 in Africa, and 12 across Asia and the Middle East.