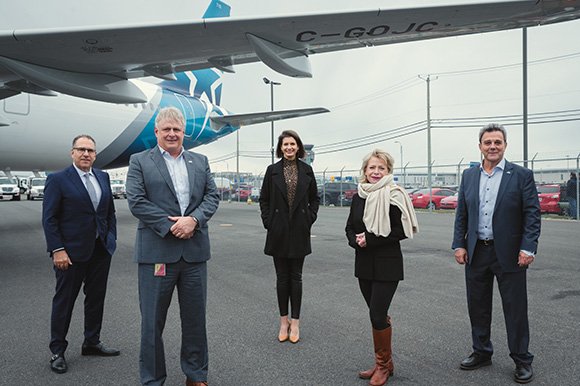 Air Transat is launching a seasonal service between Quebec City and London Gatwick (LGW) next year—a route described as “a dream come true” by the Canadian airport’s president and CEO, Stéphane Poirier.

Flights to the UK from Quebec City Jean Lesage International Airport (YQB) will run from May 11, 2022 through Sept. 28, operating once a week using Airbus A321neo aircraft.

In addition, the leisure carrier will resume its transatlantic route from Routes Americas 2019 host Quebec to Paris Charles de Gaulle (CDG) during summer 2022, having suspended flights at the onset of the COVID-19 pandemic.

“Although our industry has been severely weakened by the global pandemic, Air Transat has chosen to invest in our market by offering the public a second direct connection to Europe, after Paris,” Poirier said. “It is essential that passengers return if we are to prove to Air Transat that it was right to place its trust in us.”

Data provided by Sabre Market Intelligence shows that O&D traffic between Quebec City and London totaled 9,380 two-way passengers in 2019, with the majority of passengers flying one-stop via Toronto Pearson (YYZ) or Montreal (YUL).

The figure placed London as the biggest unserved transatlantic market from Quebec during the year, ahead of Barcelona, Spain, and Geneva.

“London is the world's No. 1 international market, and this route's strong tourism potential is undeniable, both for Quebec travelers and for Britons who want to visit our beautiful province,” Transat chief sales and marketing officer Joseph Adamo said.

“The addition of this city pair is an integral part of our strategic plan and our ambitions for developing our offering out of the Capitale-Nationale region.”

Air Transat’s new London route is the latest success for Quebec City after Air Canada confirmed plans to add seasonal service to Vancouver (YVR) and Calgary (YYC), Alberta, from next May.

Flights to YVR will start on May 20, 2022, with up to three flights a week, while service to YYC will debut a day later, offering up to four weekly flights.