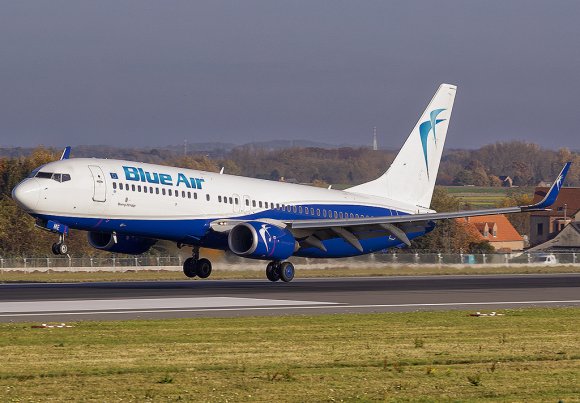 Blue Air is expanding service from Bucharest (OTP), Cluj-Napoca (CLJ) and Iasi (IAS) with 10 new routes effective summer 2022. Five new routes are launching from Bucharest to Zaragoza, Bilbao, Seville, Porto and Olbia, while Cluj-Napoca will get services to Malaga and Valencia. In addition, Iasi will be connected to Mykonos, Zakynthos and Heraklion. All 10 routes will begin in June 2022 and be served twice a week using Boeing 737-800s.

Flybondi will restart international operations to Brazil and Uruguay from December. The airline, which currently flies to 13 domestic destinations in Argentina, says Punta del Este (PDP) in Uruguay and Florianópolis-Hercílio Luz (FLN) in Brazil would be served from Buenos Aries’ Jorge Newbery Airport (AEP) from Dec. 17. Service to PDP will be 4X-weekly, while FLN will receive three flights per week.

HiSky will begin serving Milan Bergamo (BGY) from Chisinau (KIV) in Moldova from Dec. 24. Flights will be twice a week on Mondays and Fridays. “We believe that it will be an attractive route for the diaspora in the region and for city breaks in the famous fashion capital,” said Iulian Scorpan, HiSky general manager.

Ukraine International Airlines will continue flights to Tashkent (TAS) during the winter season. The summer season route from Kyiv Borispol (KBP) was due to end on Oct. 29 but will continue following strong demand, the airline says. Flights will operate once a week.

Connections from London City (LCY) to the capital of the Czech Republic are set to resume on Oct. 31 with BA CityFlyer. The return of Prague means that 13 of the 15 routes that BA CityFlyer operated in 2019 have now returned to the schedule. Only Milan Linate (LIN) and Munich (MUC) will again feature on the airport’s departure board in the months ahead. LCY says the airport is on-track to welcome 145,000 passengers in October, which is up 21% on September.

With the lifting of travel restrictions between Jamaica and Trinidad and Tobago, Caribbean Airlines is restarting direct service between Port of Spain (POS), Trinidad and Kingston (KIN), Jamaica from Dec. 1. The flights are timed to facilitate same-day onward connections to Nassau in the Bahamas and other destinations. Additionally, the carrier’s services between Port of Spain to Sint Maarten (SXM) will resume on Dec. 11.