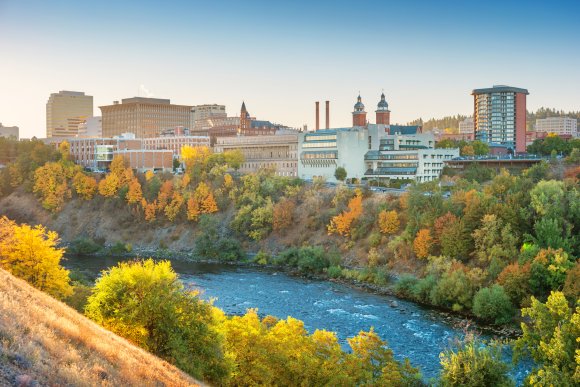 It is the first new route the all-50-seat Embraer ERJ-145 operator has revealed since announcing its planned launch and initial network of eight routes at the end of September. The RNO-GEG service will be operated 3X-weekly.

The leisure-focused brand—aha! stands for “air-hotel-adventure"—launched Oct. 24 and is operating all flights from its RNO base to destinations within 1-2 hours flying time.

“We are really excited to provide inland [Washington state] residents the opportunity to take short trips to Reno and Lake Tahoe without the hassle of multiple airport stops and layovers,” ExpressJet CEO Subodh Karnik said. “Aha!’s nonstop flight from Reno to Spokane will also be a boon to incoming tourists, who will have more time to catch Gonzaga [University] basketball, year-round festivals and events, and even walk the Spokane River Centennial Trail.”

ExpressJet, which has its corporate headquarters in Atlanta, had shut down in September 2020 after years of providing extensive contract flying for major US airlines, but was revived this year under the aha! brand.

ExpressJet opened its new aha! service with flights from RNO to Pasco (PSC) in Washington state from Oct. 24. Other destinations in the carrier’s network include Bakersfield (BFL), Fresno (FAT), Humboldt County (ACV) and Ontario (ONT) in California; and Eugene (EUG), Medford (MFR) and Redmond (RDM) in Oregon.