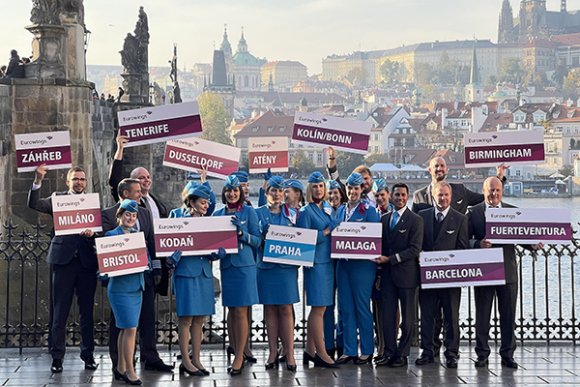 Fresh from opening its new base in Prague (PRG), Eurowings has unveiled plans to add eight more destinations from the Czech capital for the summer 2022 season.

The airline, which will fly from the airport to 14 European destinations this winter, intends to expand its network to include more points in Cyprus, Greece, Portugal, Spain and Sweden.

“Prague is a highly relevant location for Eurowings, so we will once again significantly expand our route network with eight new destinations in the next summer flight schedule,” Eurowings CEO Jens Bischof said.

“This will enable us to fly even more leisure and business travelers to attractive destinations throughout Europe from March.”
To Spain, Eurowings already serves Málaga, Barcelona, Fuerteventura and Tenerife. From March 2022 the LCC will add services to Alicante (ALC), Palma del Mallorca (PMI) and Valencia (VLC).

Faro (FAO) in Portugal, Larnaca (LCA) in Cyprus, Corfu (CFU) and Crete (CHQ) in Greece, and Stockholm (ARN) in Sweden will also be launched during summer 2022.

By summer 2022, the Lufthansa Group subsidiary will have three Airbus A320 based in Prague. Flights will be operated by the Austria-based and Austria-registered Eurowings Europe Airbus fleet.

Earlier this week, Eurowings signed a codeshare agreement with Czech-based Smartwings. According to the deal, selected Eurowings connections will be offered under Smartwings flight numbers.