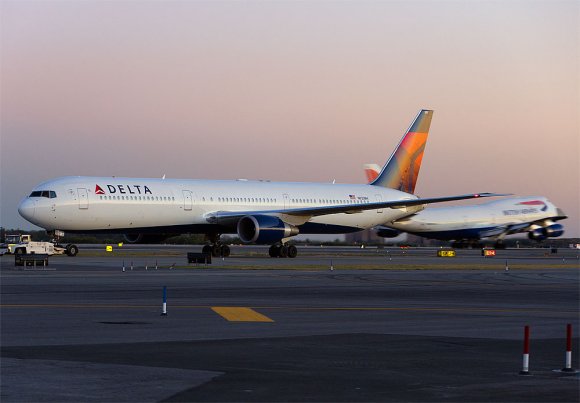 Delta Air Lines is the latest carrier to report a surge in demand for transatlantic travel, while International Airlines Group (IAG) has announced plans to ramp up capacity on Europe-US routes.

Pandemic restrictions on non-US citizens that applied to 33 countries will be lifted from Nov. 8, meaning fully vaccinated travelers from the UK and Europe will be able to fly to the US again.

In the six weeks since the US reopening was announced, Delta said it has seen a 450% increase in international point-of-sale bookings versus the six weeks prior to the announcement. Many international flights are expected to operate at 100% load factor on Monday, the Atlanta-based carrier added.

Delta, which serves 10 of the 33 countries, said the strong demand is reflected across both leisure and business travelers, particularly to Atlanta, Boston, Los Angeles, New York and Orlando. CEO Ed Bastian described the transatlantic reopening as “the start of a new era for travel.”

“While we have seen many countries reopen their borders to American visitors over the summer, our international customers have not been able to fly with us or visit the US. All of that changes now,” Bastian said.

According to data provided by OAG Schedules Analyser, Delta will operate 25 routes between the US and Europe during the week commencing Nov. 8, including nine services from New York John F Kennedy (JFK and five from Atlanta Hartsfield-Jackson (ATL). The carrier’s two-way capacity is currently about 93,700 seats, which will gradually increase to about 99,000 by the end of the year.

IAG CEO Luis Gallego has also labeled the full reopening of the transatlantic travel corridor as a “pivotal moment” for the industry. “Long-haul traffic has been a significant driver of revenue, with bookings recovering faster than short-haul as we head into the winter,” he said.

“There’s a significant recovery underway and our teams across the group are working hard to capture every opportunity. We continue to capitalize on surges in bookings when travel restrictions are lifted.”

Gallego said the group—which owns British Airways, Iberia, Aer Lingus and Vueling—is “very optimistic” that its transatlantic capacity would return to 100% of 2019 levels during the summer 2022 season. British Airways’ capacity to the US is currently about 63% of pre-crisis levels.

Delta and IAG are not alone in reporting increased demand for transatlantic flights following the US government’s decision to reopen its borders. Air France on Nov. 4 said that between now and the end of March 2022, the carrier plans to return to a capacity to around 90% of 2019 levels, up from 50% during summer 2021.

Air France plans to resume service from CDG to Seattle (SEA) with 3X-weekly flights from Dec. 6, and a 3X-weekly CDG-LAX-Tahiti (PPT) route from Nov. 6. It will launch a new route between Pointe-à-Pitre (PTP) and JFK (2X-weekly) from Nov. 24.

Elsewhere, Lufthansa has reported a “boom in demand” for US routes in recent weeks. Germany’s flag-carrier said the number of weekly bookings has increased by 51%, and new bookings on transatlantic markets to about 80% of 2019 levels.