By Aidan Mooney and David Casey

With O&D traffic totaling more than 477,000 two-way passengers in 2019, Germany was the sixth-largest country market from the Mediterranean island of Cyprus, behind the UK, Turkey, Russia, Greece and Israel.

However, the traffic figure represented a drop of almost 5% on the previous 12 months as scheduled capacity between the two countries declined by about 20%. The reduction was largely because of the collapse of leisure carrier Germania, which filed for bankruptcy in February 2019.

In the summer 2018 season, Germania had offered about 84,000 two-way seats between Germany and Cyprus, accounting for 21% of all capacity between the two countries. The airline was the second-largest operator in the market behind Lufthansa, which commanded a 35% capacity share.

Since the airline’s collapse, easyJet and Ryanair offered flights to Paphos from Berlin Tegel during summer 2019 and 2020, before switching to Berlin Brandenburg (BER) in summer 2021 following Tegel’s closure.

Lufthansa also entered the Paphos market in summer 2021, flying from Frankfurt (FRA) and Munich. This winter, OAG data shows that Ryanair will also fly to PFO from Cologne/Bonn (CGN) and Memmingen (FMM).

However, the remaining destinations previously offered by Germania remain unserved and there are currently no direct options for travelers in northern Germany. 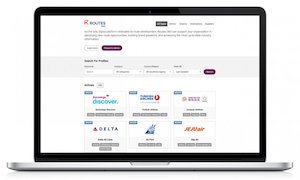 Germania started the Paphos-Hamburg route in March 2015 and continued to operate the service year-round until its failure. Flights were offered twice a week during summer and once a week in winter using Airbus A319s, targeting inbound leisure passengers to Paphos.

According to data provided by Sabre Market Intelligence, O&D traffic between Paphos and Hamburg totaled some 18,781 two-way passengers in 2018—the fourth-largest Paphos-Germany city-pair behind Berlin (40,448), Dusseldorf (25,209) and Nuremberg (19,902).

In 2019, Sabre data shows Paphos-Hamburg O&D traffic of 5,971 passengers—98% of which traveled nonstop with Germania in the weeks before its demise. However, analysis of the Hamburg catchment area—up to a 60-mi. radius from the airport—reveals 9,730 two-way passengers, despite the lack of direct service.

ASM’s Airport Catchment Analyser shows that most of this traffic was outbound from Germany—with 68% of passengers originating in the catchment area—while the balance of visitors traveled from Paphos to stay in the catchment.

With the lack of nonstop connectivity, most of the traffic (90%) traveled a considerable distance to Berlin, where direct flights were offered by easyJet and Ryanair—and some even went to Amsterdam (AMS) (4%), where flights were available with Transavia.

A very limited market flew from Hamburg and made a connection, accounting for just 6% of the total traffic.

If we observe the behaviour of the same catchment over the same time period for passengers traveling to Heraklion (HER) in Greece—a similar type of market but one that is served from Hamburg—a very different picture emerges.

Firstly, the 2019 traffic generated from the 60-mi. catchment was more than 100,000 two-way passengers, with 70% using the local airport in Hamburg to make their journey with a choice of carriers including Condor, Corendon, Eurowings and TUIfly.

Of the total traffic, 95% were German residents travelling outbound to Heraklion, with just 5% inbound. This suggests the direct connectivity has stimulated the market size with outbound leisure.

The balance of the traffic from the 60-mi. catchment to Heraklion (10%) used other German airports. Despite the direct connectivity, some consumers still make what might seem like unusual travel choices to their destination—usually because of schedule, pricing, product, timing, or other factors that the local service does not offer.

What can be concluded from the observations is that the Hamburg catchment area is capable of generating a large demand for leisure markets. Even with no direct flight to Paphos there is identifiable demand.

With a served market, the 60-mile catchment has captured most of the share despite competition from other airports with competitive capacity to the same market. This suggests a desire for passengers to use the local airport.