The European Union (EU) and Armenia have signed a common aviation area agreement that removes limitations and restrictions on flights between EU member states and the former Soviet republic.

The deal replaces existing bilateral agreements with Armenia, enabling EU and Armenian airlines to provide an unlimited number of direct services between any point in the EU and any point in Armenia.

“The agreement will allow for more travelling choice for citizens, new opportunities for the aviation industry, and better connectivity with new routes and destinations to the benefit of consumers, the tourism sector and people-to-people contacts," said Adina Vălean, commissioner responsible for mobility and transport.

The EU said the agreement would “enhance market access to the benefit of consumers, provide new business opportunities for European companies and ensure fair and transparent market conditions, based on a clear regulatory framework.”

Armenia is a landlocked nation surrounded by Turkey to the west, Georgia to the north, and Azerbaijan to the east. With a population of three million, the country’s aviation market had been growing steadily prior to the pandemic.

The latest figures for November 2021 show that about 133,000 departure seats are being offered by carriers—equivalent to 75% of the number available at this time two years ago.

By country, Russia is Armenia’s largest international market, accounting for about two-thirds of departure seats, followed by Ukraine with 7.4%. United Arab Emirates (5.7%) and Qatar (3.2%) are the third and fourth largest markets, with Austria (2.9%) in fifth.

Analysis of the OAG data shows that only 11,000 monthly departure seats—and six routes—are currently being offered to destinations in the EU. 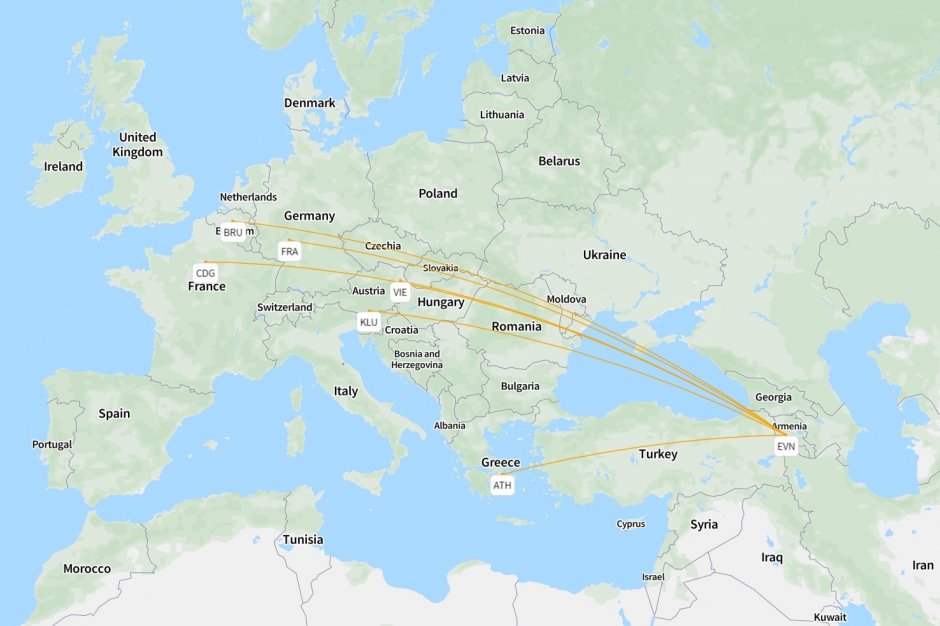 Although full-service carriers currently account for about 87% of capacity from Armenia, the country is striving to increase the number of low-cost operators serving Yerevan’s Zvartnots International (EVN).

Over the past two years, the likes of Wizz Air, Eurowings and Bees Airline have launched routes to the country, while Transavia.com France is scheduled to enter the market from March 2022 with flights from Paris Orly (ORY).

In addition, Air Arabia and the Armenian National Interests Fund (ANIF) in July 2021 signed an agreement to launch a new national airline. The LCC will be named Fly Arna and be based at EVN.

It is hoped the carrier will further boost Armenia’s tourism industry, which in 2019 contributed almost 11.8% of the country’s GDP and accounted for 12.5% of the total employment.