Birmingham Airport (BHX) has been confirmed as the main base for revived UK regional carrier Flybe, which hopes to begin scheduled operations in early 2022.

The airline intends to fly a network of domestic routes, as well as serving “key regions” across Europe. Its entire fleet will be comprised of De Havilland Canada Dash 8-400s.

Flybe CEO Dave Pflieger, the former president and CEO of Alaska-based regional airline Ravn Air, described Birmingham as an “ideal choice” for the carrier’s base as the city is a “global travel hub where local and connecting customers have access to over 150 worldwide destinations.”

The previous incarnation of Flybe was headquartered in Exeter and collapsed into administration in March 2020, less than two months after the UK government announced a rescue package.

At the time, the company blamed its demise on rising fuel costs, currency volatility and market uncertainty, alongside “added pressures on the travel industry” following the COVID-19 outbreak.

Flybe’s brand and assets were later sold to Thyme Opco, a business linked to hedge fund Cyrus Capital. New York-based Cyrus Capital was previously part of a consortium that owned the airline alongside Virgin Atlantic and the now-defunct Stobart Air.

Pflieger said a key area of focus for the new Flybe would be environmental sustainability, confirming that the airline’s entire fleet would be made up of Dash 8-400s. He added the aircraft could “complete short journeys almost as quickly as a regional jet, but with lower CO2 emissions.”

Flybe’s fleet immediately prior to its insolvency comprised a mix of aircraft, including 54 Dash 8-400s, nine Embraer ERJ175s and two ERJ195s.

According to data provided by OAG Schedules Analyser, the carrier was the largest operator of domestic flights in the UK during 2019, with a 38.2% share of departures. This put the airline ahead of easyJet on 19.8% and British Airways on 16.9%.

However, since the airline ceased operations, many of its former domestic routes in particular have been picked up by other carriers, notably Aurigny Air Services, Blue Islands, Eastern Airways and Loganair.

During November 2019, Flybe operated 62 domestic services in the UK and faced direct competition on just nine of them—meaning it was the sole provider of flights on 85% of its UK domestic network.

Analysis of OAG data for November 2021 shows that 48 of the same 62 routes are now served by one or more operator, leaving just 14 former Flybe routes unserved.

The 14 UK domestic routes currently unserved during November 2021 are: 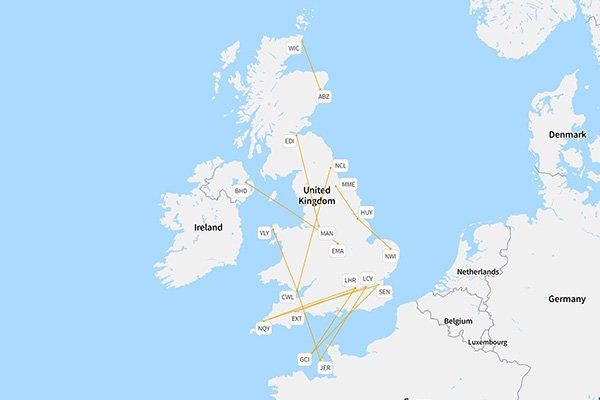 However, looking at Flybe’s former European network tells a different story as more than 50% of the routes previously offered by the airline remain unserved.

Of the 30 international routes provided during November 2019, the airline faced direct competition on seven of them. The latest schedules show that a further seven are now served, leaving 16 still without an operator. In August, Routes looked at the case for one of those routes, Birmingham-Lyon.

The 16 international routes currently unserved during November 2021 are: 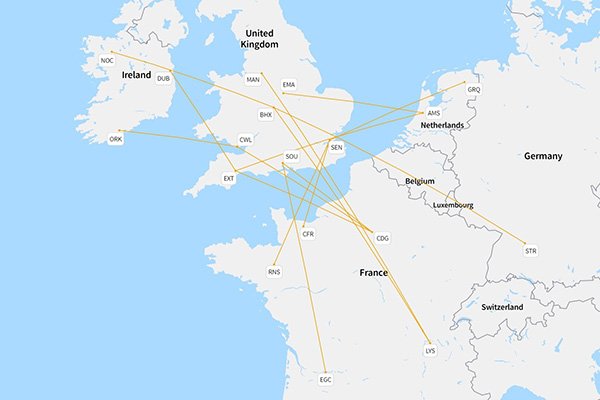