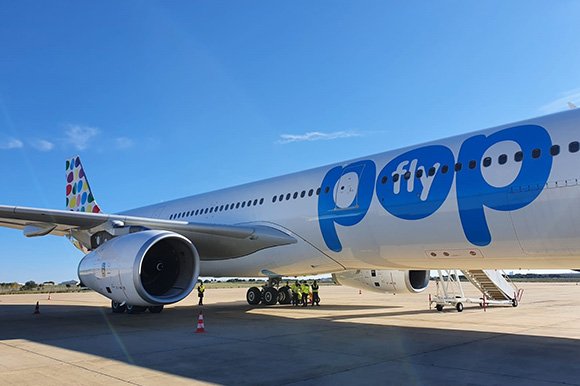 Flypop, the startup to be based at London Stansted (STN) that aims to operate Airbus A330s between the UK and India, continues to delay its launch, missing a planned October start.

The latest sign that the delay could last a while longer is the redeployment of flypop's first Airbus A330-300 for cargo operations in partnership with Portuguese wet-lease operator Hi Fly.

Flypop originally planned to launch in the fourth quarter of 2016, flying VFR passengers from the UK to the Indian secondary cities of Amritsar (ATQ) and Ahmedabad (AMD) using an all-economy-class A330. However, the project has experienced lengthy delays.

The most recent hurdle is a frequency cap. The Indian government is currently limiting UK-India flights to a total of 34 weekly frequencies per side. This appears to go against the UK-India bilateral air transport accord, which allows seven weekly frequencies for each side on any UK-India route—excluding Bangalore (BLR), Chennai (MAA), Delhi (DEL), Hyderabad (HYD) and Mumbai (BOM).

Meanwhile, the first of flypop’s four Airbus A330s, sourced from lessor Avolon, has already been delivered. “Flypop believes the most effective way to start flying operations is with cargo until the frequency cap on UK-India flights is increased,” flypop said in a statement.

“We hope our cargo routes will assist with the global demand for cargo and help to alleviate cargo shortages for the Christmas holidays and beyond,” flypop CEO Navdip Singh Judge said, adding that flypop plans to commence passenger services between STN and India “once the global pandemic situation becomes clearer.”

“We are looking forward to working with the flypop team in the short-term doing cargo and in the long-term flying Indian and South Asian diaspora passengers into the second cities of India,” Mirpuri said.

Meanwhile, rival UK-India startup Hans Airways is on the brink of finalizing its AOC, but is also being held up by the frequency cap.

Similar to flypop, Hans Airways plans to operate nonstop A330-300 flights from Birmingham ({{BHX}) in England to undisclosed secondary destinations in India.

The carrier was founded by CEO Satnam Saini in October 2019 and an AOC application was submitted in March 2020, with a view to an autumn 2021 launch.

“Progress towards granting the AOC has been substantial. Essentially, all that's left is the proving flight,” Hans Airways nonexecutive director Barry Humphreys said during a recent interview. “If progress is made with the Indian authorities over the next month or so, we will be able to launch services early next year [2022]. As ever, it is difficult to predict the outcome of government bilateral talks [over the frequency cap], especially given the added complexity with COVID.”

Schedule analysis reveals a potential gap in the market. Nonstop UK-India capacity fell 18% in 2019, driven by the failure of Jet Airways and Thomas Cook. That same year, UK-India traffic increased 5.7%, but only a third of passengers flew nonstop. It is also notable that all nonstop UK-India routes operate from LHR, apart from Air India’s BHX-ATQ service.