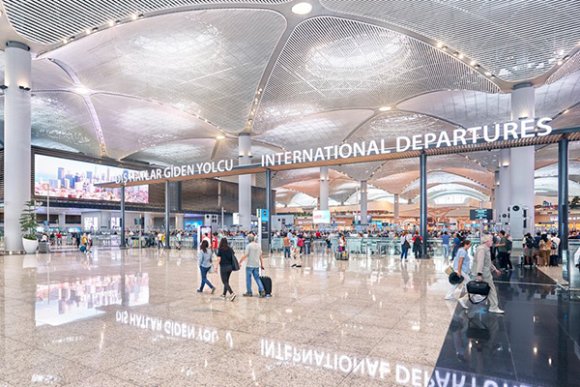 Majid Khan is VP of aviation development at Istanbul Airport.

How is the recovery proceeding at IST?

We are recovering really well. Like the entire sector we had quite a tough 2020, especially in April and May during the first lockdown when the airport only operated repatriation flights.

We had expected that summer travel was going to bounce back in 2020 but then Turkey was put on the red list for most of Europe, which really hit us. But we turned our focus toward markets where we had limited travel restrictions, and Russia has bounced back well. We expect to have more passengers from Russia this year than we had in 2019.

The Middle East and especially GCC has also been strong. We see some VFR potential from European countries that’s mainly transfer to the Middle East, Iran and the subcontinent. We don't have much traffic to/from India because of the restrictions, but Pakistani traffic has fully recovered.

In October we reached an 80% recovery, but we expect to reach 50% for the entire year compared to 2019. This was what we had forecasted. We expect to reach our recovery by 2023, which is quite ambitious, but we think it's reachable.

How is your route development strategy evolving in the new airport?

We have our strategy in place from 2020 to 2026. The first plan is recovery, and the second plan is to reach 100 million passengers. We moved to the new Istanbul airport just before the pandemic, but the previous airport was capacity constrained.

We couldn't speak with any airlines, so Istanbul Airport (IST) has never been that active in route development because we couldn't accommodate any airlines at our airport.

I've been with the airport for two years now, I came from Oslo and I was with Copenhagen for five years before that. When we started our dialogue with the network planners, they said they hadn't really considered Istanbul, firstly because it’s the home of Turkish Airlines, and secondly as it was a capacity-constrained airport.

But our current airport is built for the future. Now we have 255 destinations and 70 airlines, which is five more than we had before pandemic. This year we attracted 11 new airlines and 26 new routes.

Istanbul is a market which has always been perceived to be a transfer point between east and west. In 2019 only 1.5% of our traffic out of 69 million was low-cost, which is very limited when compared with other hubs like Schiphol, Frankfurt and Paris, so the point-to-point potential has never been utilized.

When people say we’re well-covered from Europe, I always say we’re not. Yes, we have a great network of 120 destinations in Europe, but the majority of them are transfer-driven.

What are your main network development targets?

We want to stimulate our market. We would like to develop Turkish Airlines, but we would also like to attract more foreign airlines because they bring tourism.

Turkish Airlines fly to Tokyo, but their flow is mainly from Europe via Istanbul to Japan. If we could bring in ANA we will get traffic from their network via Haneda (HND) to Istanbul.

One of the low-hanging fruits which we are targeting is that we are a mega Star Alliance hub, but we don't have Thai Airways, United Airlines or Air Canada.

We also think the cruise market will play a big role, especially from North America. We have one of the biggest cruise ports in Europe in Istanbul, so this is this area we'll definitely target.

What will the airport do to make this a reality?

This crisis is temporary and the industry is going to change. We can already see the flows are completely changed and we think airports should play a bigger role. There are many interline possibilities, and we are now developing our own product as the first mega-hub in the world. The name is Istanbul World Connect and it will be launched in the next couple of months.

We have signed a strategic agreement with one of the largest OTAs in the world so passengers will be able to connect from anywhere in the world to anywhere via Istanbul. Airlines don't need to have cooperation with each other—it will be two tickets, one itinerary.

Passengers currently need to collect their luggage in Istanbul, but we will be able to transfer self-connecting passengers within two hours. When they will arrive, they will pick up their luggage, be fast-tracked to passport control, a quick bag drop, and then back to their flight.

We will also provide a lot of add-on services, so if they have 8-10 hours we could offer a city trip with a guided tour, lunch and back again to the airport, or the Turkish Hammam lounge.

We think this is the future because it will create more feed to Turkish Airlines, but also create more value for overseas carriers who enter the market.

For example, Sichuan Airlines operate Chengdu (CTU) to IST. Now they fly into a dead end, but soon they can bring transfer passengers beyond Istanbul to Africa and Europe, and the second leg will have incremental passengers from Turkish Airlines.

We have also developed a Chinese-friendly airport. China is one of the key markets for us—we had only 430,000 Chinese tourists in 2019, which is not much compared to the size and potential of the country. We looked at the entire customer journey of Chinese travelers and implemented services such as Chinese signage, Chinese speaking guides, hot water dispensers and dedicated check-in counters. We want to make their journey and transfer as seamless as possible.