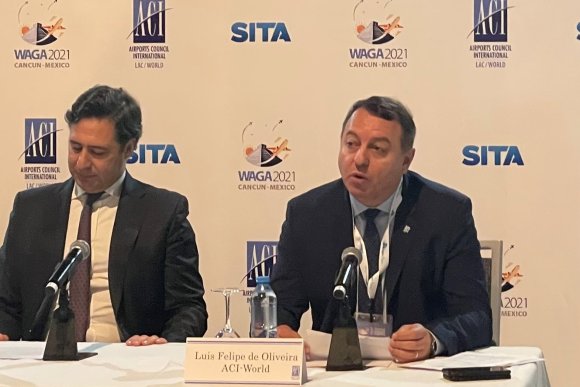 His comments came as the trade body published a policy brief outlining the “critical need” to modernize global policy frameworks on airport charges.

Speaking on Nov. 23 at ACI World’s general assembly in Cancun, Mexico, de Oliveira stressed that the industry is an ecosystem that “should not be a zero-sum game.”

“More than 70% of our members have supported their airline partners—and other parts of the industry—during the pandemic because that was the right thing to do,” he said. “That makes claims by IATA that we have not been supportive out of context.”

In October IATA alleged that increased charges from airport and air navigation service providers have already reached $2.3 billion, adding that further rises could be “tenfold this number” if proposals already tabled are granted.

Findings published by ACI World claimed that average global aeronautical revenues from charges on a per passenger basis declined approximately 20% in real terms between 2014 and 2019, despite capital expenditures (CAPEX) increasing over this period.

The trade body said the impact of airport charges on passengers is “very small to negligible” and represent about 5% of airline costs historically. ACI added that 24% of all airport revenues come from charges that are levied on airlines.

As such, it said airports need to be able to set charges with a commercial focus to attract the level of investment needed and to signal whether users are willing to pay for these investments.

“Where there is excess demand for airport capacity and expansion is difficult, airport charges should play a critical role in signaling which airline operations would make the best use of the scarce capacity,” de Oliveira said.

“Charges should signal the scarcity and whether the market is willing to pay for capacity expansion. Where there is a willingness, scarcity-based charges can be used to prefund much needed CAPEX.

“On the other hand, where airport capacity is underutilized, there is a role for airport charges to provide incentives for new services to increase regional connectivity and hence maximize the economic and social benefits of air transport.”

The ACI report outlines that a new approach to airport charges and regulation is therefore required, noting that policies should ensure that they serve the best interests of the traveling public and local communities.

It added that in consideration of the changed competitive landscape, the best way forward is through commercial agreements between airports and airlines.

The report also said that any consideration of whether to regulate—or continue to regulate—airport charges should be subject to a cost-benefit analysis. In cases where commercial arrangements between airports and airlines will not satisfactorily constrain airport charges, “light-handed” regulation should be applied.

“Any regulation applied should seek to foster the evolution of competitive forces, and to encourage the market players to come to their own resolution,” the policy brief says.