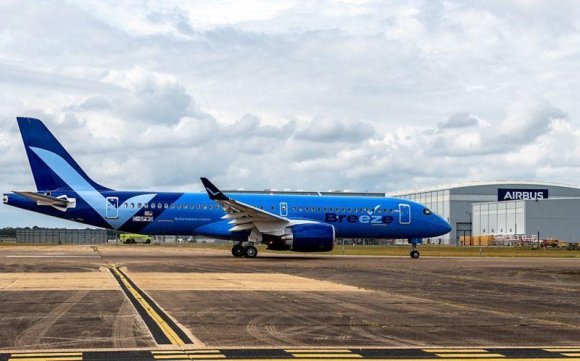 US startup Breeze Airways, which currently operates only domestic flights, is eyeing expanding its network to as far away as Brazil, according to the airline’s founder and CEO David Neeleman.

Breeze operates Embraer E190 aircraft, but the carrier is poised to take delivery of 80 Airbus A220-300s, with the first five expected to arrive in the 2022 first half.

Neeleman noted the A220-300 can carry 30 passengers more than the E190 with a range of up to 6.5-hours flying time. Neeleman, who founded Azul in Brazil, said he foresees operating A220-300s to Brazil, especially if talks between Breeze and Airbus about adding extra range to the A220-300 are successful.

“There’s just a lot of capitalism in Brazil, if we can get that range up to where we think we can,” Neeleman told the World Aviation Festival in London this week. “We can serve 10 or 12 cities in Brazil from Florida, which would be incredible.”

Neeleman said Breeze is also considering flights to “other places in Latin America” and to Hawaii. “There's a lot of great things you can do with that aircraft.” he said, adding that the carrier may add lie-flat seats on A220s for long-haul flying.

But the Breeze CEO, who also founded JetBlue Airways, said he is wary of launching transatlantic routes, noting traffic across the Atlantic is seasonal and operating to Europe would be costly.

Neeleman said the majority of Breeze’s current routes are profitable on a “variable basis,” although further scale will be needed to cover the airline’s overhead costs. “The summer was pretty good for our first summer ever,” he added. “We launched with 16 cities and 39 routes and 13 airplanes. Our revenue in October was higher than July, so we're doing well.”

Breeze is the sole operator on 98% of the routes it serves.