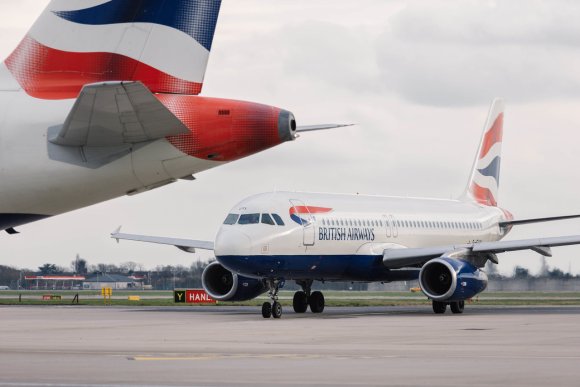 British Airways (BA) has finalized the initial network for its new short-haul subsidiary to operate from London Gatwick (LGW).

The airline has opened reservations for 35 routes across Europe and North Africa, mainly centered on popular summer vacation destinations in Cyprus, Greece, Italy, Spain and Turkey. Six services will start on March 29, 2022. The remaining destinations will be added throughout April.

BA CEO and chairman Sean Doyle described the launch of the new standalone business at Gatwick as a “landmark moment” for the airline. The planned lower-cost unit will be similar to the BA CityFlyer operation at London City Airport (LCY), which operates under the BA name but exists as a separate entity.

The Gatwick offshoot—expected to be named BA EuroFlyer—will launch later in 2022 once it receives its air operator’s certificate. Until then, the short-haul flights from Gatwick will be operated by mainline BA, initially using three Airbus A320-family aircraft. BA expects to increase the number of aircraft dedicated to offering short-haul routes from LGW to 18 by the end of May.

“Despite the ongoing public health situation, today’s announcement is a positive signal that consumer confidence is returning as people start thinking about making travel plans for next summer,” Gatwick CEO Stewart Wingate said.

BA suspended flights from the UK’s second-largest airport in April 2020 as the COVID-19 crisis deepened and in May last year warned that flights may not return. Although a number of long-haul routes to the likes of Barbados (BGI), Orlando (MCO) and Tampa (TPA) have since resumed, short-haul operations from Gatwick have been on hold for some 20 months.

Plans for the new unit were first announced in August, but hit a stumbling block the following month when BA failed to reach an agreement with trade union British Airline Pilots’ Association (BALPA). However, further talks proved fruitful, and the International Airlines Group-owned carrier began recruiting for pilots in November.

According to data provided by OAG Schedules Analyser, BA operated 74 routes from LGW in 2019 offering more than 4.4 million seats across 24,942 flight departures. The airline accounted for almost 17% of capacity from the airport during the year and nearly one-fifth of all flights.

Looking specifically at the oneworld alliance member’s short-haul routes, the most capacity was deployed on flights to Jersey (JER) in the Channel Islands, offering a total of 469,702 two-way seats. The Spanish city of Malaga (AGP) was the second-largest route by capacity with 365,780 seats, and Glasgow (GLA) was third, with 359,118 seats.

Of the 35 short-haul destinations on offer from Gatwick during the summer 2022 season, BA served 30 of them during summer 2019, OAG data shows. The new routes planned for next summer are to Antalya (AYT), Athens (ATH), Berlin (BER) and Santorini (JTR), while BA is swapping Milan Bergamo (BGY) for Milan Malpensa (MXP).

BA’s new carrier will provide competition for easyJet, which holds a dominant position at Gatwick with a 56% share of all departure seats from the airport during December 2021. The latest schedules indicate BA and easyJet will compete directly on 33 of the 35 routes being launched by BA.