Peter Gerber became the CEO of Brussels Airlines in March 2021.

Speaking in the latest issue of Routes magazine, Gerber discusses demand patterns this summer and some of the carrier’s longer-term network ambitions. Read the full interview in Routes magazine, out now.

We’re getting back to a level above 80% compared with 2019 levels. Capacity for the summer was originally planned to be 70-75% under our restructuring program, but we’re growing at a faster rate because of demand. In Europe, the focus is leisure and VFR travel as we’re still waiting for an improvement on business routes. A lot of companies planned their business travel at the start of the year during the omicron wave, so hopefully we should see demand pick up further as the year progresses.

That’s one of the million-dollar questions. It’s changing a little but it’s still not as long-term as we were used to in pre-pandemic times. We are seeing some passengers planning trips months in advance, but there’s also still very short-term booking demand. Given this pattern, we have to remain very agile.

Does this mean your network will remain as flexible as it was at the height of the pandemic?

No airline can be as flexible when they’re flying at full capacity. We need to offer as much certainty to our customers as possible, particularly in the VFR and business segment. Stability is a value in itself. There also must be stability when it comes to maintenance and crew rostering. 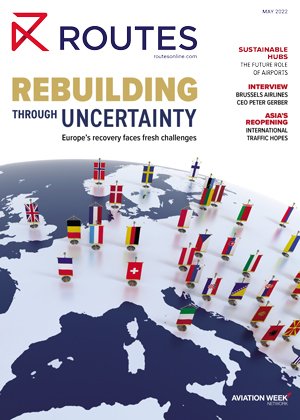 Read the May issue

Is your focus to restore your pre-crisis network or are you looking to open new markets?

It’s a mix. When it comes to long-haul, we’ve restored pretty much what we had in Africa. We’ve taken a ninth long-haul aircraft so will resume Conakry and Ouagadougou in West Africa in June. On the north Atlantic, there could be one or two destinations added over the next year if they fit the need of connecting the US to Africa.

On the short- and medium-haul side, we’ve resumed all the major cities as you would expect, but we’ve also looked to add some new tourist destinations. Morocco was new for us last summer and performed well.

After reducing your fleet you’ve since taken one Airbus A330 and two A320 family aircraft. What are your longer-term plans?

We want to grow but we need to prove that our current strategy works. That’s exactly why we took the additional aircraft because we really want to test the waters. I’m convinced it will be positive but let’s see. Of course, growing our fleet will be much easier if the strategy is successful. And if it isn’t, then we have to analyze what the problem was and do things differently.

Read the full interview with Peter Gerber in the latest issue of Routes magazine.