How will the LCCs respond to the challenges and opportunities during the next decade? Which LCCs will take the lead in the market? Can the traditional short-haul, point-to-point and quick turn operational model of LCCs still guarantee their success? Will the long-haul LCC model work? How are the LCCs responding to changes in international demand traffic patterns? Low Cost Airports – which airports are providing LCCs with what they require? These were the main discussion points in the first group session at this year’s Routes Asia Strategy Summit at the Borneo Convention Centre in Kuching, Sarawak, Malaysia.

It is clear that LCCs have been innovators across the region and there was a general consensus among the panellists that LCCs have to continue to innovate in order to succeed in the highly competitive skies. “You only have to look at the way technology has developed to see just what we are facing,” noted Cowen. As the youngest of the LCCs it has been able to develop a business model that better offers consumers across its varied markets what they require.

“In some of our markets we have very different ways of selling than others and as an airline you have to provide a service to the customers you serve,” explained Cowen. “On one hand we are selling to be people using smartphones and ipads while on the other we are dealing with people that don’t understand social media and have never heard of Facebook.”

One clear barrier for all to growth is capacity and the opportunity to get slots. Air Asia X’s Venggatarao Niadu noted that the long-haul LCC is leveraging on the short-haul network of its partners within the AirAsia group but it has still be unable to fulfil its growth ambitions. “We do have problems at major airports like Beijing and Shanghai in China where we can’t increase frequencies,” he said.

However, from every problem there is an opportunity and Niadu noted that a restriction on its growth in these two markets has proved to be very good for the airline’s yields. “There is an obvious opportunity to enhance yields as when capacity can’t increase and demand is still growing there are clear benefits to the operator,” he said.

Almost sharing the same surname but with a very different business model, Tara Naidu, chief commercial officer, Air India Express highlighted how the Air India low-cost subsidiary has no immediate plans to leverage on the operations of its parent. “We are much more conservative and will stick to point-to-point, low-cost, high density markets,” she explained.

Naidu acknowledged that India was “a little behind many other markets” in terms of the LCC evolution but confirmed the airline, which mainly serves Middle East and South East Asian markets from India, is willing to consider new opportunities. “We serve Chennai – Kuala Lumpur but when we needed to retire aircraft we had to look at how we could continue to fly to this market with reduced resources so we offered through flights with another destination. We looked at this as two point-to-point flights. We didn’t expect the connecting demand but found people wanted such an option,” she said.

The major demand for air services between India and the United Arab Emirates (UAE) to support migrant workers has been a major segment of the market for Indian low-cost carriers such as Air India Express and Spicejet. However, both Naidu and SpiceJet’s Dr Jain said flights to the country’s largest airport, Dubai International, will be restricted by its runway resurfacing work this summer. The Dubai runway work shows how big an issue capacity is for airlines.

“It is the airlines that suffer. We don’t want to cancel flights as it is peak season in this market for us. We know that we will have to face disruption but understand that this is a short-term pain for long-term gain,” explained Naidu. Both Naidu and Jain confirmed that the carrier’s will switch Dubai capacity to the Emirate of Sharjah during the runway closure.

Hong Kong Express’ Andrew Cowen also echoed the capacity issues and revealed the start-up has faced its own problems securing the necessary slots it requires for its own operations from the busy Hong Kong International Airport. “We have had problems gaining the slots we required to have a coherent flights schedule that supports our business model,” he said. “As a region we suffer airport and air traffic capacity restrictions. We have got to speed up the rate of improvement or we will simply see the price of fares going up and that will disenfranchise passengers”.

One subject that was a reoccurring theme throughout the day’s Strategy Summit was the talk of the new landmark air transport agreement between the European Commission and the Association of Southeast Asian Nations (ASEAN). After his boss, Azran Osman-Rani had earlier revealed that a return to Europe would be on the cards once AirAsia X receives its new Airbus A350s, Niadu noted that it wouldn’t necessarily be that straight forward to grow. “We would still have that same issue... slots.”

Although a tentative agreement was reached in February at the end of a successful two-day EU-ASEAN Aviation Summit, Hong Kong Express’ Cowen doesn’t expect progress to be quick. "The big official move to open skies is inching along. It will get there but will be fragmented," he explained. Of course, a form of open skies already exists across the region which he described as “open skies by stealth” but said this was only really effective in primary markets.

“A lot is already happening but this is happening via primary gateways and as governments see their flag carriers being competed with they start to react. For this to work we need to spread the traffic through smaller secondary markets, providing numerous benefits by moving passengers away from the already congested major airports of the region,” said Cowen.

An issue that is certainly impacting the development of LCCs in India is the skills shortage within the local market. “There isn’t a whole load of skilled manpower available, said Dr Anurag Jain, senior vice president network planning & revenue management at Indian carrier SpiceJet. “We currently have to recruit from outside the country.” Air India Express’ Naidu shared these concerns. “We're seeing real shortage of skills for pilots, not first officers but skilled commanders,” she added.

They both agreed this was a problem that needs to be addressed quickly. Interestingly, Cowen said he hadn’t suffered the same problems with the appointment of flight crew in Hong Kong, but has had his own recruitment issues. “The biggest problem Hong Kong Express has faced with recruitment was getting skilled network planners and pricing specialists,” he said. But, what is the answer to this issue? “Airlines need to invest in academies to generate pilots and engineers of the future. The average skill level is actually quite low across the industry and we need to up this as a matter of urgency,” he concluded. 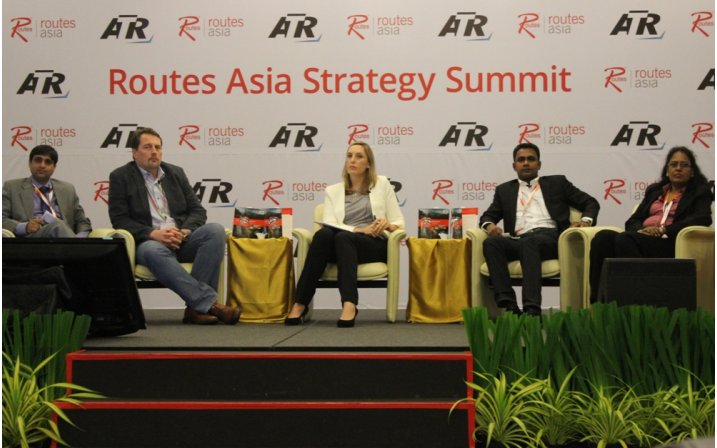