US carrier JetBlue Airways has announced plans to expand its network at Fort Lauderdale’s Hollywood International Airport including the introduction of additional domestic and international flights and its debut in the intra-Florida market. The airline plans new flights to Cartagena, Colombia and Las Vegas, Nevada and Jacksonville, Florida from October 29, 2014, the same day the airline will also launch its previously announced non-stop service to Pittsburgh.

JetBlue and their commitment to the Colombian market is strengthened by this new service to Cartagena from Fort Lauderdale. JetBlue began services on the New York - Cartagena route in November 2012 and the route has been successful in connecting Cartagena with the North East United States.

The Florida region is home to a large community of residents of Colombian origin that drives demand between the two regions, while tourism and commerce links are also substantial. In 2013 the demand between the Cartagena region and Fort Lauderdale/Miami region totalled around 175,000 passengers.

Cartagena, which is the second most visited part of Colombia after the capital Bogota is an upcoming tourism destination, growing with the aid of new hotels and infrastructure. Looking forward to 2016, an additional 3,124 hotel rooms will be added to the city. Business and commerce are also expanding in the region with large investments in the petrochemical industry. The city’s air transport connectivity is being supported by ASM, the route development consultants, which is providing strategic advice, business case development and hands-on network development support. 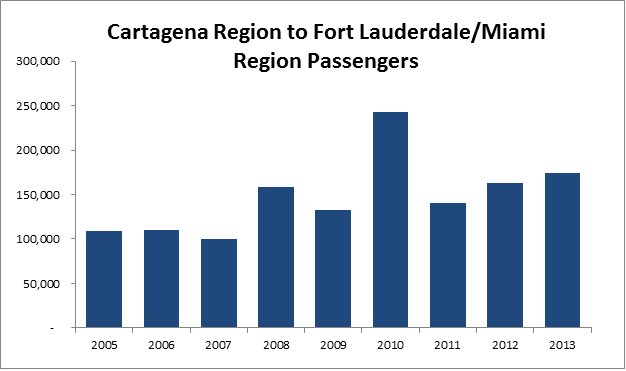 The Fort Lauderdale – Las Vegas route will place JetBlue into direct competition with its low-cost rivals Southwest Airlines and Spirit Airlines which have served the market since November 2008 and February 2007, respectively. According to MIDT data an estimated 314,000 bi-directional O&D passengers travelled on this route in 2013, up 3.4 per cent on the previous year. Spirit Airlines had a 40.2 per cent share of this traffic and Southwest Airlines a 38.5 per cent with both growing traffic in 2013, Spirit by 42.8 per cent.

JetBlue’s debut in the intra-Florida market will see it introduce this winter's only jet service between Fort Lauderdale and Jacksonville, a route it will operate twice daily with a 100-seat Embraer 190. This is a market of around 175,000 bi-directional O&D passengers a year (based on 2013 MIDT data). The route is currently served by Southwest Airlines but it will end the connection in November 2014. Silver Airways has already announced its intent to launch flights in August 2014 using a Saab 340 turboprop.

“This new route will provide business and leisure travelers with affordable and award-winning non-stop full-size jet service between these two vibrant cities,” said Dave Clark, vice president, network planning, JetBlue Airways. “Additionally, Jacksonville customers will now have the ability to conveniently connect in Fort Lauderdale to destinations throughout the United States, Latin America and the Caribbean.”

“As of October 29, 2014 we will offer 33 non-stop routes originating in Fort Lauderdale-Hollywood and we will continuously expand our presence in this region to meet the growing demand. We plan to offer 100 daily flights by 2017," said Robin Hayes, president, JetBlue Airways.