As Airbus and Boeing go head-to-head in negotiations for Emirates Airline’s outstanding order of 70 extra-widebodied aircraft, aviation intelligence expert OAG has revealed the critical importance of Emirates’ choice and how it could impact up to 88 per cent of the carrier’s flights.

“Reportedly, Emirates will be applying its new order to its shorter-haul routes in the Middle East and Africa. Our route analysis shows that, despite operating aircraft capable of flying distances of up to 8,500 miles, 88 per cent of Emirates’ July 2014 flights still operate to destinations within 4,000 miles of Dubai,” said John Grant, executive vice president, OAG. “With this in mind, it’s clear why Emirates is taking more time to consider its position; there is a lot at stake.”

According to the data provider, the amount of Emirates flights to destinations over 4,000 miles from Dubai has only increased by one per cent since July 2013. There are only 19 services to destinations beyond 4,000 miles with just one addition since last year, to Boston. Statistics from OAG show the average distance per flight in July 2014 across the Emirates network is 2,463 miles, up from 2,361 last year. The longest sector Emirates operates is Dubai-Los Angeles International, at 7,233 miles and just over 16 hours’ flying time.

OAG’s analysis of Emirates’ network also demonstrates why the carrier is pressing Airbus to re-engine the A380. Emirates is the world’s largest operator of the A380 and currently has 50 in service, with another 90 on order. The airline operates A380s mostly to Europe and Asia Pacific, and the aircraft are used for 19 per cent of Emirates’ flights in July 2014, an increase from 12 per cent last July. However, the majority of services are still operated by the airline’s fleet of 136 Boeing 777s. The Emirates A380s have 171 more seats than the main 777 configuration and this July sees the airline continue to add A380 capacity to airports in Western Europe.

Emirates’ biggest destination region is Asia Pacific, which accounts for 39 per cent of its flights in July 2014, according to OAG schedules data. Of the big three Gulf carriers, Emirates has 44 per cent of flights to Asia Pacific from the UAE and Qatar, and has the largest market share across all regions except for the Middle East.

Latin America is still largely unserved by Emirates, with just two services to Brazil and nothing to the west coast of the region. Routes such as Dubai - Lima or Dubai - Santiago are approximately 8,000 miles in distance, which would potentially push the A380 near the limit of its range, meaning these destinations may only become viable if and when Airbus deliver an A380neo (New Engine Option).

Emirates surprised many when it was revealed by Airbus that it had cancelled an order for 70 A350 jets, worth $16 billion at catalogue prices, but Grant believes that the European manufacturer remains well positioned to bid in the updated tender for these extra widebodied aircraft.

“It may well be that Emirates had a time sensitive cancellation clause on the A350 which was about to expire. It’s not all bad news for Airbus though. This is potentially a good opportunity for other carriers who can take advantage of the production spaces to get earlier delivery of their own A350 orders,” he said.

“While there may be speculation that Emirates is attracted by the now-proven lower operating costs of the Boeing 787 Dreamliner, the airline appears to be well-placed with current aircraft in its fleet and those on order, to move into new growth markets as they emerge. These may be long-haul or shorter routes where Emirates’ hub operations can drive the traffic density required to make the most of the wide-body fleet,” he added.

The full OAG analysis of Emirates’ fleet and market strategy is outlined in OAG’s FACTS (Frequency and Capacity Trend Statistics) report for July 2014, which can be downloaded here. 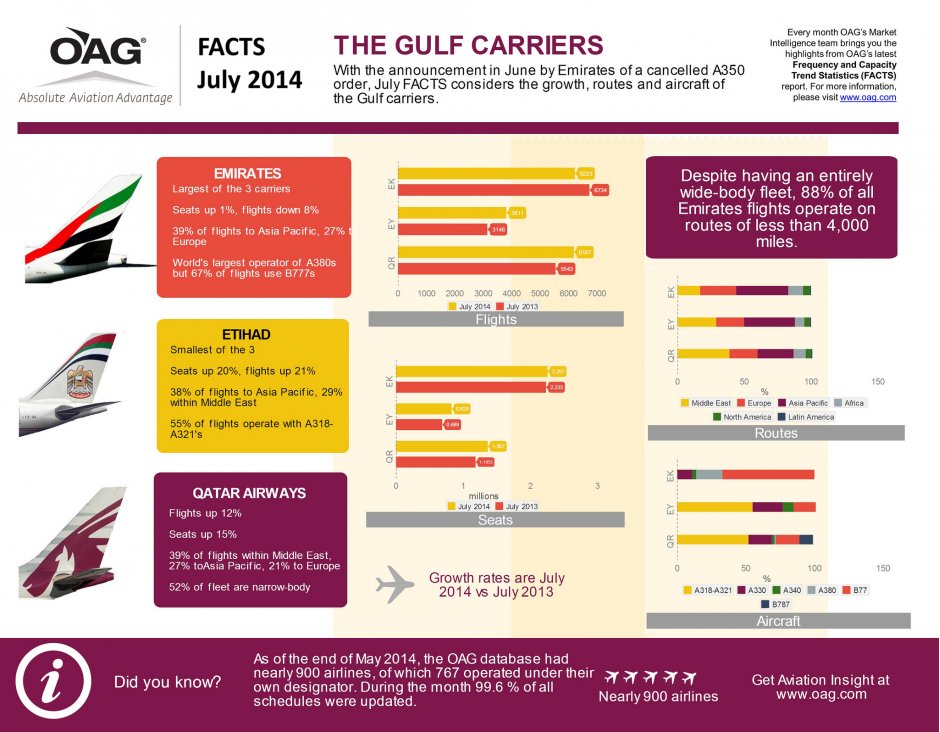