European leisure airline group, Thomas Cook Airlines, has announced plans to launch the UK’s first non-stop air service to the popular US entertainment and ski destination of Reno-Tahoe. The flights to the Gateway to Tahoe in Reno, Nevada will operate twice weekly from London Gatwick Airport during the winter 2015/2016 schedule.

The confirmation of the new long-haul link at the World Travel Market in London earlier today continues a successful period for Reno-Tahoe Airport Authority, the owner and operator of the Reno-Tahoe International and Reno-Stead Airports, which last month announced the planned resumption of international air services after a 15 year gap. 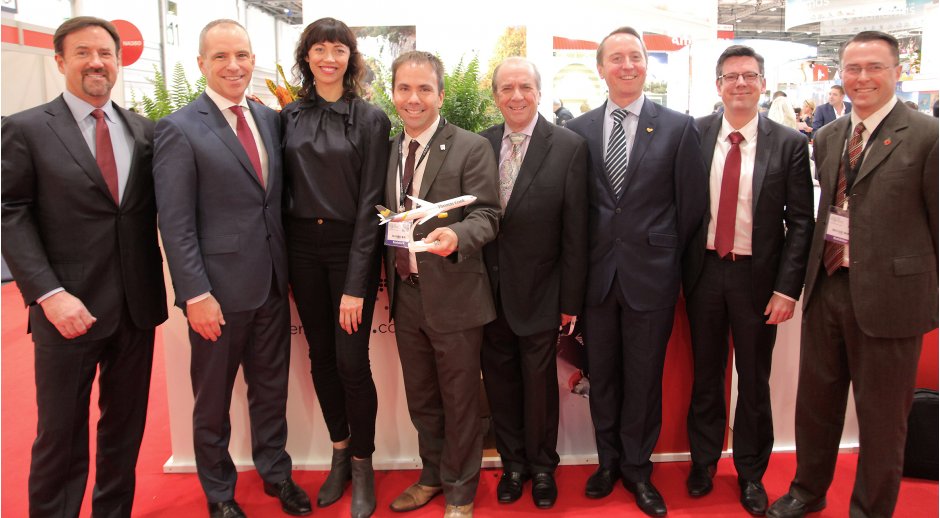 Alongside the Mexican link, the air service development team at Reno-Tahoe Airport Authority has been working to establish a long-haul link to Europe to support the strong demand from across the Atlantic to the city. Every year more than 25,000 bi-directional O&D passengers fly between Europe and Reno-Tahoe International Airport with annual numbers reaching as high as 38,000 in the last decade.

“We have been marketing to airlines about the strong potential our region provides to visitors and are delighted that discussions at World Routes in Chicago in September this year helped us bring this to fruition with Thomas Cook Airlines,” Quentin Koch, vice president of air service development, Reno-Tahoe International Airport told Routesonline ahead of the route’s unveiling.

Our analysis, below, shows that the UK was by far the largest market for passengers flying between Europe and Reno-Tahoe International Airport in 2013, accounting for over a quarter (25.7 per cent) of the total annual bi-directional O&D demand. The data shows other notable markets in and out of Reno-Tahoe International Airport were Germany (14.2 per cent), Italy (9.7 per cent), Spain (9.0 per cent) and France (8.3 per cent).

The new Thomas Cook Airlines service will operate in partnership with Ski Lake Tahoe and like the Guadalajara flight is contingent upon approval of landing rights by US Customs and Border Protection. It will operate every Wednesday and Sunday between December 19, 2015 and April 9, 2016.

Speaking at the route unveiling at the World Travel Market, Christoph Debus, chief executive officer, Thomas Cook Airlines said: “It’s fantastic news that we’re able to offer skiers from the UK the first ever non-stop flights to Reno-Tahoe, opening Lake Tahoe as a real option for their winter break. On top of our new routes to Miami and New York next summer and our brand new Premium cabin, we’re leading the way in offering a quality experience at great prices for the discerning traveller heading to the USA.”

Reno is the most populous Nevada city outside of the Las Vegas metropolitan area and famous for its casinos. The city sits in a high desert at the foot of the Sierra Nevada and close to the popular tourist location of Lake Tahoe, the largest alpine lake in North America. Its location means Reno-Tahoe International Airport is one the closest airports to the major ski resorts of North America with passengers able to see the numerous ski runs on landing.

Lake Tahoe is home to North America’s largest concentration of world-class ski resorts and with 400 inches of snow a year and over 600 ski runs with 113 lifts across an area 17,000 acres, Lake Tahoe is establishing itself as an increasingly popular destination for skiing and snowboarding enthusiasts, with the city offering of Reno adding to the après ski fun.

Andy Wirth, vice chairman of the Reno-Tahoe Airport Authority said this combination of incredible skiing and the Reno-area casinos will make the new flight a unique and unforgettable experience for travellers. “We’re thrilled to welcome Thomas Cook Airlines and Great Britain to the Reno-Tahoe International Airport. With this unparalleled nonstop convenience and a world class travel partner in Thomas Cook, this flight really opens up one of the best skiing markets in the world, the United Kingdom, to Lake Tahoe and the great casinos and night life of Reno,” he said.

The London Gatwick – Reno-Tahoe route will be flown using one of Thomas Cook Airlines’ refurbished Airbus A330-200s. The carrier has revealed a new long-haul product from summer 2015 with new Economy and Premium services. You can see more details of the new interior in the below video.

Thomas Cook Group Airlines, which includes Thomas Cook Airlines UK, Thomas Cook Airlines Belgium, Thomas Cook Airlines Scandinavia and Condor Flugdienst, currently operates a fleet of four A330-200s configured with 273 Economy seats and 49 Premium Cabin seats on its routes from Manchester and new summer 2015 services from Belfast to Florida and Las Vegas. Its flights from Glasgow and Gatwick and Stansted Airports in London are flown with an all-Economy 321-seat A330-200 and will be supplemented by a brand new A330 leased from AirTanker next year.

“Our brand new long haul Economy cabins and service will challenge perceptions of our airline, and our new Premium will ensure skiers can experience a great range of services, flying in style to their winter break in Lake Tahoe,” added Debus.