Launched in June 2011, Google+ is Google’s answer to Facebook. It is intrinsically linked to Gmail, YouTube and other Google services, and currently has 540 million active users.

According to the report by ACI Europe, some airports are using Google+ to promote their video pages or audio-visual material, although the amount of airports using the service is limited. The social media platform is most popular in Germany, and 77 European Airports welcoming 22% of passenger traffic are active on Google+

According to ACI Europe, there are 141 European airports on YouTube, which welcome 55.4 percent of European passenger traffic. Based on figures from November 2014, there were 13,890,290 uploaded views on the European airport videos at that time.

Schiphol and Frankfurt both have dedicated TV channels that they use for internal communications within and around the airport - providing content for dissemination on YouTube. Amsterdam Schiphol clearly has a great presence on YouTube, with the most subscribers and 1,086 videos. The airport uploads most videos in both English and Dutch - adding to its appeal.

According to the report by ACI Europe, airports are using YouTube to promote their videos on all kinds of different subjects including corporate videos, flash mobs and animations about security.

Instagram is very much a smartphone-operated platform, which could make it slightly more difficult for airports to utilise. Used in the right way however, Instagram could be the perfect platform for airports to increase their social activity and brand online.

According the the report by ACI Europe, 38 European airports representing 35.2 percent of passenger traffic are active on Instagram. The social platform is most popular in Northern and Western European countries such as Denmark, Finland, Norway, Sweden, UK and Ireland.

The chart opposite shows the number of followers on Instagram each airport has. However, the report by ACI Europe shows that it is actually Avinor Oslo Gardermoen who has the greatest number of engagements on Instagram, closely followed by Pulkovo Airport, St Petersburg - who does not even register in the Top 5 for Instagram followers. This shows that despite the smaller number of followers, Pulkovo Airport's Instagram followers engagement levels are far greater than the majority of airports in Europe.

The ACI Europe report highlighted that most European airports are using Instagram as a branding tool - attracting people to the airport brand and the values it represents more visually. Gatwick Airport used Instagram effectively for its 'Gatwick Selfie' campaign in mid-2014 (see below). 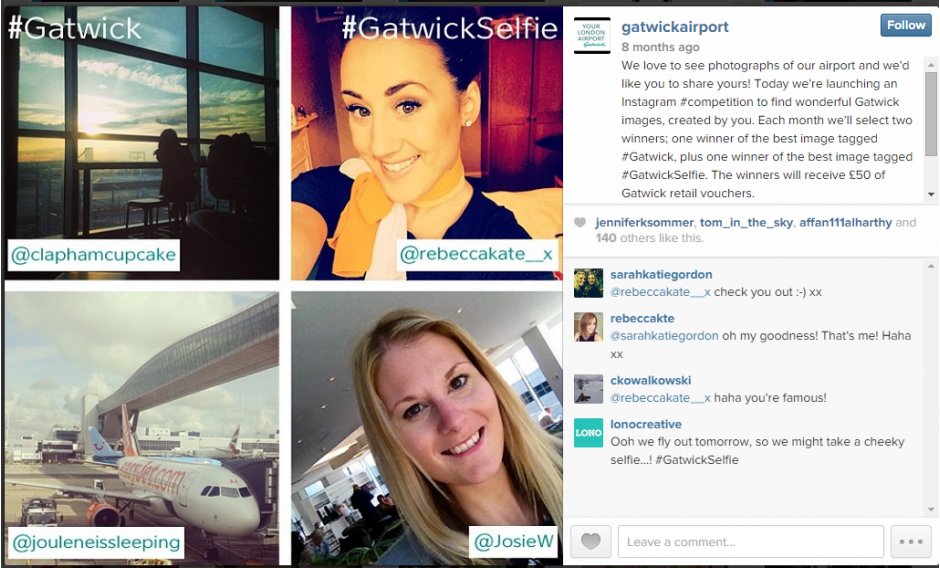 Finally (and briefly) LinkedIn is home to 18 European Airports, welcoming 13.1 percent of European passenger traffic active on LinkedIn. Collectively, they have 121,838 followers, according to the ACI Europe report. An airport operators presence on LinkedIn is a simple way of reflecting how digitally aware they are, although it isn't as useful for much else, compared to other platforms, in terms of customer engagement.

DAA ranked top in terms of LinkedIn connections, with 4,440, followed by Manchester Airports Group and Brussels Airport Company (3,643 and 3,300 respecitvely).

With over 330 million users, LinkedIn is where the smart brands go to try and build their own presence and enhance their visibility online.