This summer marks the fourth summer since Japan and the Republic of China (Taiwan) signed an Open Skies agreement. At the time it was hailed by tourism bodies and academics as a breakthrough agreement. Three years on, aviation intelligence provider OAG has highlighted how has it has changed the options for flying between the two countries.

According to data from the schedules experts, the number of flights this summer is up 38 per cent on the summer of 2012, while the number of airline seats is up by 30 per cent. The number of scheduled airlines operating between Japan and Taiwan is up by one, to 13, between the two periods but there has been some notable changes.

This has seen low-cost arrivals in the form of Peach, AirAsia Japan, Scoot and Tigerair Asia, while AirAsia Japan has morphed into Vanilla Air, and full-service operators United Airlines and Vietnam Airlines have pulled out of the market.

Even if the number of operators is fairly stable the market is supporting many more routes, says OAG. In the summer following the agreement the number of routes operated rose by 50 per cent compared to the previous year. And they have continued to rise. This summer, a total of 27 routes will be operated by one carrier or another, five more than three years ago.

Unsurprisingly Tokyo and Taipei are key markets with Tokyo Narita – Taipei Taoyuan the largest, accounting for close to a quarter of all capacity. However the non-capital markets have grown by over 100 per cent from summer 2014, notes OAG. 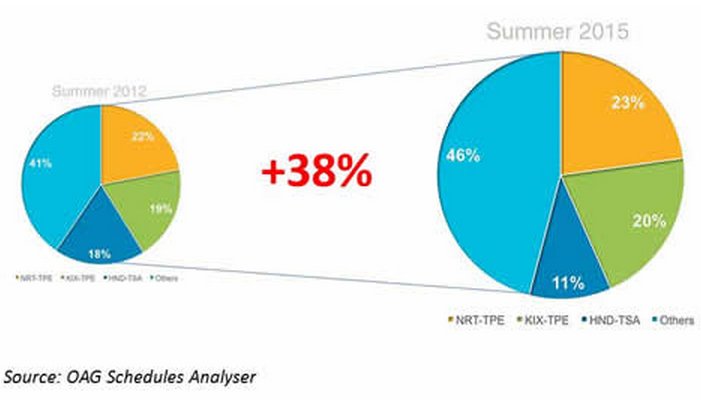 EVA Airways is the carrier which has added the most capacity, with 39 per cent of additional frequencies since summer 2012 flying under their brand, while the OAG analysis shows the low-cost carriers have also attacked the market and between them Vanilla Air and Peach Aviation have also contributed 39 per cent of the additional flights: today, 16 per cent of scheduled flights between the countries are operated by low-cost carriers.

While the EVA Air strategy has been to widen the route network between Taiwan and Japan (now 14 city pairs for this summer), Vanilla Air has concentrated on the Tokyo Narita – Taipei Taoyuan route with a range of early morning and evening departures from the Japanese capital, and only recently has added a link between Narita and Kaohsiung. Meanwhile, Peach has solely concentrated on linking Taiwan to the Osaka market.

Back when the Open Skies agreement was announced there was at least one dissenting voice, saying that the market was already saturated between Tokyo and Taipei. However, OAG’s analysis shows that has proved not to be the case. And with the opening earlier this month of the new low cost terminal at Narita the question will be how much more growth can this market support?

“The Japan-Taiwan air market has been growing steadily at over eleven per cent for the last three years – undoubtedly influenced by the Open Skies agreement signed in late 2011. With new carriers entering the market and fledgling carriers building their networks, this is clearly another dynamic intra-Asian market. The largest Japan tourism expo to be held in Taiwan has just finished, illustrating the increasing tourist demand and there certainly going to be more growth to come,” Mark Clarkson, author of the analysis and business development director, Asia Pacific for OAG, told Routesonline following the publishing of the data report last week.