The often out-spoken group chief executive officer of Qatar Airways, His Excellency Akbar Al Baker, has held a landmark press conference in Washington adding the airline's voice to the ongoing US Open Skies debate. During his visit to DC, Al Baker also met with government officials and prepared for upcoming US launches to Los Angeles, Boston, and Atlanta. He also revealed the carrier is looking to add a second daily frequency to Washington and is in talks to study the introduction of flights to some smaller US markets, including Pittsburgh.

At the press gathering Al Baker refuted what he said are the "baseless" claims of the big three US majors (American Airlines, Delta Air Lines and United Airlines) over unfair subsidies to the Gulf carriers, calling them "a transparent attempt to block new competition and limit consumer choice."

"US Open Skies Agreements are about offering choice – the ability to fly with the airline you prefer, to regions which are under-served by US carriers. The Big Three want to restrict choice. World travellers would suffer if they succeed," he added.

Al Baker used the briefing to clarify Qatar Airways' position, debunk accusations of subsidy and demonstrate the broad public benefits of the existing Open Skies Agreements. He also noted that Open Skies agreements go well beyond the interests of the Big Three citing numerous American companies and groups, which support Open Skies, including US airports, travel and trade groups, consumer groups and other US airlines.

"Qatar Airways offers important services to the United States and many American interests recognise our value. We serve markets in the Gulf region and Indian subcontinent that US carriers do not serve," he explained.

He even suggested that the actions of the US majors were a “bullying tactic” against Qatar Airways and its Gulf rivals, Emirates Airline and Etihad Airways — in part because of the US airlines’ “crap service”. He urged the US government to reject calls to revise Open Skies firmly denying that it had received illegal government subsidies.

“We don’t receive handouts,” said Al Baker at the briefing. “We don’t receive subsidies. The government is the owner [of the airline] and that is not unique. It’s owned by the state and operates absolutely independently.” He added that “the big three use a broad definition of subsidy for us [Gulf carriers], but a narrow one for (themselves),” noting that the US airlines received $15 billion in government assistance and guarantees after the 911 terrorist atrocities, and which he said could be defined as subsidies.

Qatar Airways says its passengers support local economies in the US. In 2014 alone, the airline brought 248,000 visitors to the United States and made a significant contribution of $900 million to US economies and employment, all thanks to Open Skies. Qatar Airways currently operates over $19 billion worth of direct-purchase Boeing aircraft with future deliveries of another $50 billion to come. 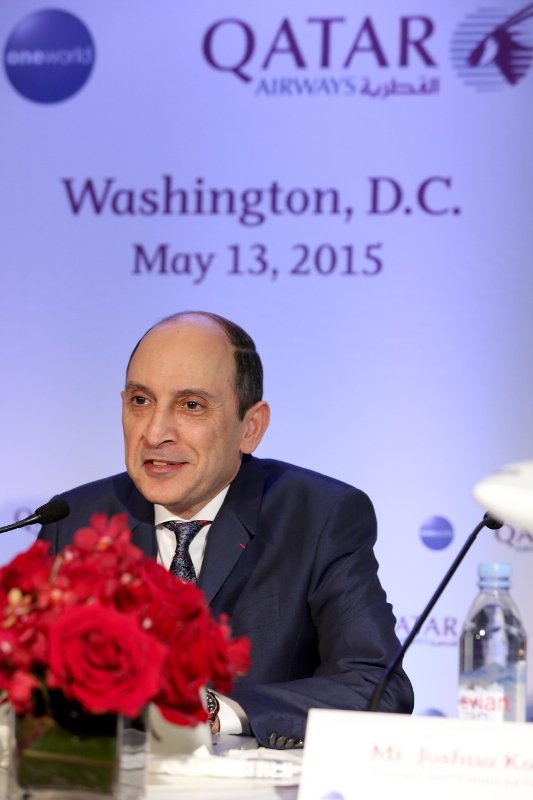 "The Big Three do not compete with us on a single nonstop route. The beneficial exchange of culture and commerce made possible by the US-Qatar Open Skies Agreement must not be blocked by the Big Three merely because we have chosen to serve markets that they have ignored," added Al Baker.

The briefing has resulted in an immediate response from The Partnership for Open and Fair Skies lobbying group that was set up by the American carriers to represent their joint interests, which claimed Al Baker’s comments were nothing more than “more name calling and denials”.

“It’s unfortunate that he [Al Baker] won’t answer serious questions about the $17.5 billion in subsidies and unfair benefits that Qatar Airways has taken from its government in order to undermine fair competition, which is a serious violation of Open Skies... The harm from their actions is real, which is why we are asking the Obama Administration to request formal consultations and a freeze on additional routes,” said its chief spokesperson Jill Zuckman.

Earlier this month, Qatar Airways announced the next phase of its United States route development and the planned introduction of three new passenger routes to Los Angeles, Boston and Atlanta during 2016. With these new destinations, it will offer daily non-stop services to all ten of the largest metropolitan areas of the United States, but revealed it is also considering smaller communities for future expansion.

At the Washington briefing, Al Baker revealed that he will meet with officials from Pittsburgh International Airport this week to discuss plans to start a possible link from Doha, although he cautioned that discussions are at an early stage and demand and business forecasts have not yet been completed on the viability of the route. According to Al Baker, Pittsburgh is just one of a number of US airports to have approached the carrier with an interest to establish direct links to the Gulf, including Orlando, San Francisco and San Jose.