Although not formally confirmed by the airline, Cathay Pacific plans to offer a four times weekly link between Hong Kong International Airport and Madrid’s Adolfo Suarez-Barajas Airport from June 2, 2016 and will be flown using a three-class Boeing 777-300ER. This is part of an ongoing strategy to expand its presence in Europe and which has already seen new flights introduced to Manchester and Zurich in the past year.

Ahead of the recent route launches the Hong Kong carrier already offered non-stop flights from the Special Administrative Region of the People's Republic of China to Amsterdam, Frankfurt, London, Milan, Moscow, Paris and Rome, although in the past year it has suspended its flights to the Russian capital.

Over the past ten years (2004 – 2013) Cathay Pacific’s European air capacity from Hong Kong has risen 44.1 per cent. It had grown 56.8 per cent until 2011 but capacity has declined 5.4 per cent and 2.8 per cent over the past two years. The London market is its largest, accounting for 43.2 of the non-stop European capacity from Hong Kong last year but this has declined from a high of 46.5 per cent in 2010 due to the introduction of the direct links to Milan and Moscow.

Our analysis of Sabre Airport Data Intelligence demand statistics shows an estimated 40,000 bi-directional O&D passengers flew between Madrid and Hong Kong in 2014, a route that is not currently served on a non-stop basis. This market has been stimulated by an average annual rate of 8.6 per cent thanks to enhanced connectivity via other hub airports.

Cathay Pacific is currently the third largest operator in this market thanks to its partner carriers and existing routes into Europe and accounted for an estimated 12.3 per cent of the traffic between the two destinations in 2014. The market leader is Emirates Airline which has carved out a 31.1 per cent share of the market since introducing flights between Dubai and Madrid in 2010 with efficient connection schedules both to and from Hong Kong.

The new four-times weekly Cathay Pacific service between Hong Kong and Düsseldorf was launched on September 1, 2015 and is being operated with a four-class 777-300ER with a First Class offering. The city, capital of North Rhine-Westphalia, Germany's most populous state, and a renowned international business centre, is the airline’s second destination in Germany, after Frankfurt. 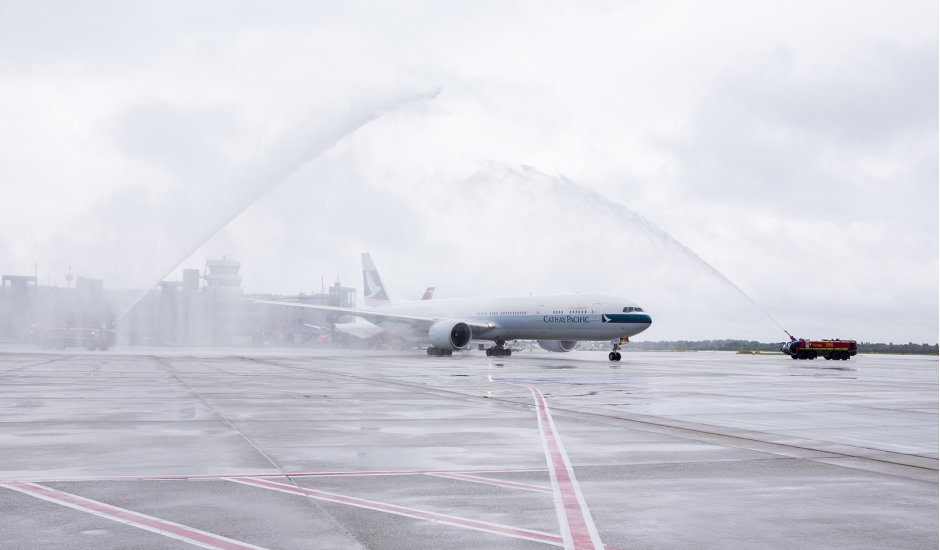