Italian flag carrier, Alitalia hopes to take a slice of the lucrative leisure market into Cuba with the introduction of a new link between Rome and Havana. The airline, part of the Etihad Airways Partner network has opened reservations for a new twice weekly operation during the winter 2016/2017 season.

Cuba has long been a popular tourist destination for Italian holiday makers and is increasingly being added to cruise ship itineraries. And with trade growing between Italy and Cuba the new route should also attract business traffic with Italian exporters and for those looking to invest in the Cuban market.

Alitalia will commence non-stop flights from November 29, 2016 with departures on Tuesdays and Saturdays.  The route will be flown using a Boeing 777-200ER configured in a three-class arrangement (business, premium economy and economy) with seating for 293 passengers.

Havana will be the fourth new long-haul destination to be added to the Alitalia long-haul network this year following recent successful launches to Santiago, Mexico City and Beijing.

“Tourism and business in Cuba have great growth prospects for Italians and this new service to this wonderful island will go towards fulfilling that ambition,” said Cramer Ball, chief executive officer, Alitalia. “The Havana flights is yet further confirmation of Alitalia's strategy to build our long-haul network of intercontinental flights to give Italians greater opportunities to travel further afield for both leisure and business.”

“Tourism and business in Cuba have great growth prospects for Italians and this new service to this wonderful island will go towards fulfilling that ambition.”

The Italy – Cuba market is already served by Blue Panorama Airlines and the TUI Group affiliated Neos Air, while this winter Meridianafly will also inaugurate flights into Havana from Milan Malpensa, flight data from OAG Schedules Analyser shows. Blue Panorama provides connectivity from Rome Fiumicino to Cayo Largo del Sur and Havana and from Milan Maplensa to Cayo Largo del Sur (CYO), Havana and a limited Varadero programme. Neos Air offers seat-only and holiday packages from Milan Malpensa to Havana and from this winter Varadero too.

A record breaking 3.1 million tourists visited Cuba in 2015, a 17.6% rise on the previous year, and that number is set rocket following the introduction of new scheduled connectivity between the Caribbean nation and the United States of America. However, Cuba's tourism industry is under unprecedented strain and struggling to meet this demand.

The US, Canada are the largest inbound markets, but the European nations of Germany, France, Britain, and Italy also were major sources of visitors followed by Japan, Haiti, Costa Rica, Ireland and Poland, reports a study by Cuba’s Office of National Statistics.

Even before the recent launch of scheduled flights between USA and Cuba, a more relaxed stance has seen a rise in passenger traffic between the countries. The Ministry of Tourism of the Republic of Cuba (MINTUR) reports that over the first six months of 2016 the total number of US citizens (including individuals of Cuban descent visiting family) visiting the country reached 304,000, a 24% rise over the first half of the record breaking 2015. Total global visitors for the period exceeded 2.1 million, an increase of 11.7% with significant rises from countries including Germany, Italy, Poland and Spain.

For the full calendar year MINTUR predicts total visitors (excluding individuals of Cuban descent with or without Republic of Cuba-issued passports) from the US to Cuba could exceed 300,000 thanks to the new scheduled commercial flights and new cruise links which will increase frequencies, destinations and lower the cost of travel. The gross economic impact of these visitors is forecast to exceed US$660 million (landing fees, cruise ship fees, cruise ship passenger expenditures, baggage fees, visa fees, ground transportation, hotels, meals, tours, sundries, gifts, gratuities, etc.), according to MINTUR. 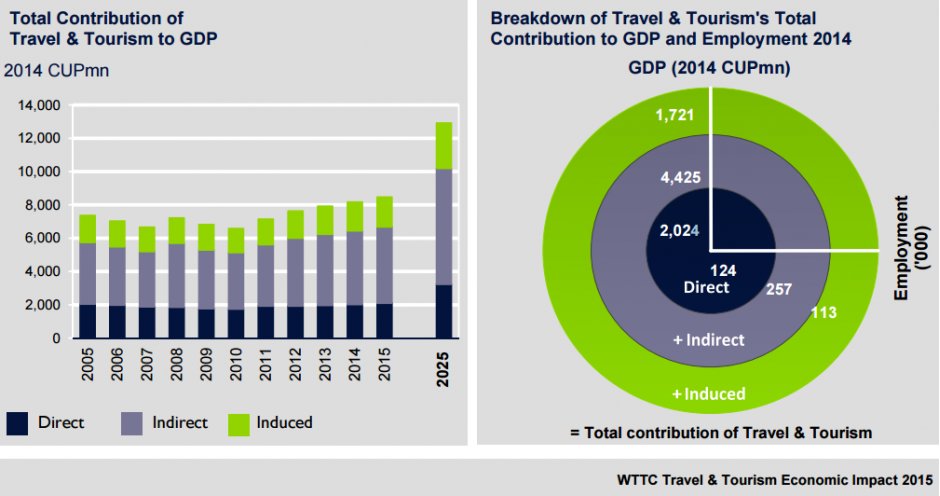