When the special Kung Fu Panda-liveried Boeing 787-9 Dreamliner of Hainan Airlines touched down at McCarran International Airport on the morning of December 2, 2016 it represented the culmination of a more than two decades of discussions and three years of formal talks between the Chinese carrier and representatives of the Las Vegas airport and the city’s convention and visitors authority, LVCVA.

The flight marked the inauguration of a new scheduled air link from Beijing’s Capital International Airport, the first non-stop link between Las Vegas and mainland China and a service that has its roots in the US city hosting the World Routes air service development forum back in October 2013 and which has been helped subsequently by regular meetings at Routes regional and world events. The LVCVA estimates the flights will account for $33.5 million in annual economic impact.

Las Vegas McCarran International Airport and Las Vegas Convention and Visitors Authority (LVCVA) will again host a Routes event in 2017 when the Routes Americas 2017 air service development forum takes place at the Aria Resort and Casino between February 14-16, 2017. North America’s top 10 airlines by size have already registered for the event.

“We have just made history flying the first commercial aircraft from Mainland China to Nevada, finally linking the capital of the People’s Republic of China with the entertainment capital of the world, Las Vegas!” said Hou Wei, senior vice president, Hainan Airlines after arriving on the inaugural service.

With China considered to be one of the leading growth markets for visitation to Las Vegas, the accessibility of the new route introduces Las Vegas to millions of prospective visitors and will be instrumental to increase international visitation.

“It shouldn’t surprise anyone to learn a review of our World Routes 2013 diaries reflects one of our initial meetings with representatives of Hainan Airlines.”

It has been a long-time goal of Las Vegas to have a direct route from the historic Chinese capital and has expanded its international capability specifically to handle new long-haul connections, adding custom-created Chinese signage and Mandarin-speaking ambassadors to support the new air service.

“Hainan Airlines’ arrival is the culmination of many years of hard work, ushering in a new era of connectivity between Las Vegas and China,” said Rosemary Vassiliadis, director of aviation for Clark County.

This process has involved numerous meetings between Hainan Airlines and McCarran International, Clark County Department of Aviation and LVCVA including over three hours of formal face-to-face meetings at seven Routes events over the past three years.

“It shouldn’t surprise anyone to learn a review of our World Routes 2013 diaries reflects one of our initial meetings with representatives of Hainan Airlines,” said Chris Jones, chief marketing officer for McCarran International Airport, the year it co-hosted World Routes that year in partnership with LVCVA.

“Air service development is a time-consuming process, but we laid a foundation in Las Vegas that year, then developed our relationship with Hainan’s team through additional meetings here and in China, as well as at subsequent World and regional Routes events around the globe,” he added. 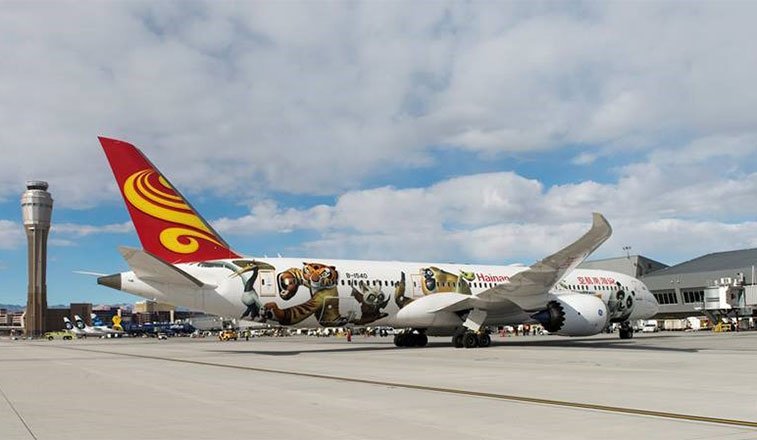 From the initial meetings in 2013 it was April 2016, shortly after a meeting at Routes Asia in Manila, Philippines that Hainan Airlines formally confirmed its intent to launch the three times weekly Beijing – Las Vegas route. This is being flown using a Boeing 787-8 with 36 business class lie-flat seats and 177 economy class seats, but the inaugural was flown by a larger 787-9 due to high demand, adding a further 76 seats. The larger 787-9 will permanently replace the 787-8 on the route from June 2, 2017 to meet the strong demand.

“In time the partnership strengthened and evolved, and it’s now borne fruit with this month’s launch of the first-ever scheduled nonstop service between Mainland China and Las Vegas. We’re confident we’re only a few steps down what will be a long and prosperous road for everyone involved,” added Jones.

“Air service development is a time-consuming process, but we laid a foundation in Las Vegas in 2013, then developed our relationship with Hainan’s team through additional meetings here and in China, as well as at subsequent World and regional Routes events around the globe.”

Chinese travellers are one of the fastest-growing and largest-spending groups of international visitors to Las Vegas. With the reciprocal 10-year tourist visas and the introduction of hotels, programming and amenities geared toward Chinese visitors, Las Vegas has established itself as a major draw for Chinese traveling to the United States.

“China is a very important market for Las Vegas. Expanding air service is a long-term process, and we share this successful achievement with the talented teams from Hainan Airlines, the LVCVA and with all of our resort and allied partners. Our partnership offers additional flexibility and convenience and increases opportunity for future growth,” explained Rossi Ralenkotter, president and chief executive officer, LVCVA.

Data from the US government shows that close to 7.3 million Chinese tourists are projected to travel to the US between now and 2021. Since the launch of its Beijing-Seattle service in 2008, Hainan Airlines has continued to expand its flight services to the US. It now operates ten China- North American routes, connecting Seattle, Toronto, Chicago, Las Vegas, Los Angles, Calgary, San Jose and Boston to destinations in China.

Prior to the Hainan Airlines service travellers between the two points had to connect via a US or Asian city and data from the AirVision Market Intelligence tool from Sabre Airline Solutions shows an annual market of around 31,000 passengers during the last year (12 months to October 2016), approximately 43 PPDEW (Passengers Per Day Each Way). When you look at demand between the whole of mainland China and Las Vegas that grows to 95,000 annual passengers or 130 PPDEW and is a market that Hainan Airlines currently holds a six per cent share.

Looking more closely at the Beijing –Las Vegas market and it is the three big US majors that currently dominate the passenger flows with United Airlines (25.6 per cent), American Airlines (20.0 per cent) and Delta Air Lines (19.0 per cent) carrying two in almost three passengers between the two markets in the past year. The main flows for this traffic have been via Los Angeles, Seattle, San Francisco, Dallas and Seoul.

This market has grown almost three fold (up 185.3 per cent) since the start of the decade an average annual growth rate of 23.8 per cent since 2010. Across the first ten months of 2016 O&D Demand was up 24.2 per cent versus the same period last year.