Last year marked the sixth consecutive year of passenger traffic growth of for Nice Cote d'Azur Airport, with the airport hoping that 2017 will be its seventh.

So far Nice's summer schedule has added 19 new routes, including a new long-haul with the comeback of Qatar Airways at Nice in July. In the same month Emirates' flagship A380 will arrive to operate the daily flight between Nice and Dubai currently utilising a B777. Nice is only the second airport in France after Paris to welcome scheduled flights with the superjumbo.

"Of the 19 new routes for summer 2017 outlined above, 15 are in Europe," she said. "We're more connected to Europe than ever. This summer the 2017 scheduled network between Nice and Europe has 27 countries, 72 destinations, 42 scheduled airlines and about 855 weekly frequencies."

Despite Nice's reputation as a holiday destination and gateway to the south of France, Marsaux explained that South and West Europe "keeps growing each year" driven partly by the outbound leisure market.

"Porto is our main remaining potential still unserved on this part of Europe. With a community of around 14,000 Portuguese residents (the third-largest community of foreigners living in the NCE area) this route represents an opportunity not to be missed (24,000 pax, BSP 2016)."

Although the airport has grown a number of new routes, it has also lost some in recent history; notably routes to Reykjavik and Rotterdam. Restoring both routes is firmy in the airport's sights, said Marsaux.

"The Reykjavik route was operated with success last summer, but unfortunately it has not been repeated. We think it's an excellent opportunity for a carrier.

"Much like that route, our Rotterdam flight was unfortunately terminated for reasons which were not related to its results. We are actively looking for a new carrier to operate this successful route (around 60,000 pax when the flights was operated) and would welcome conversations with any interested airlines." 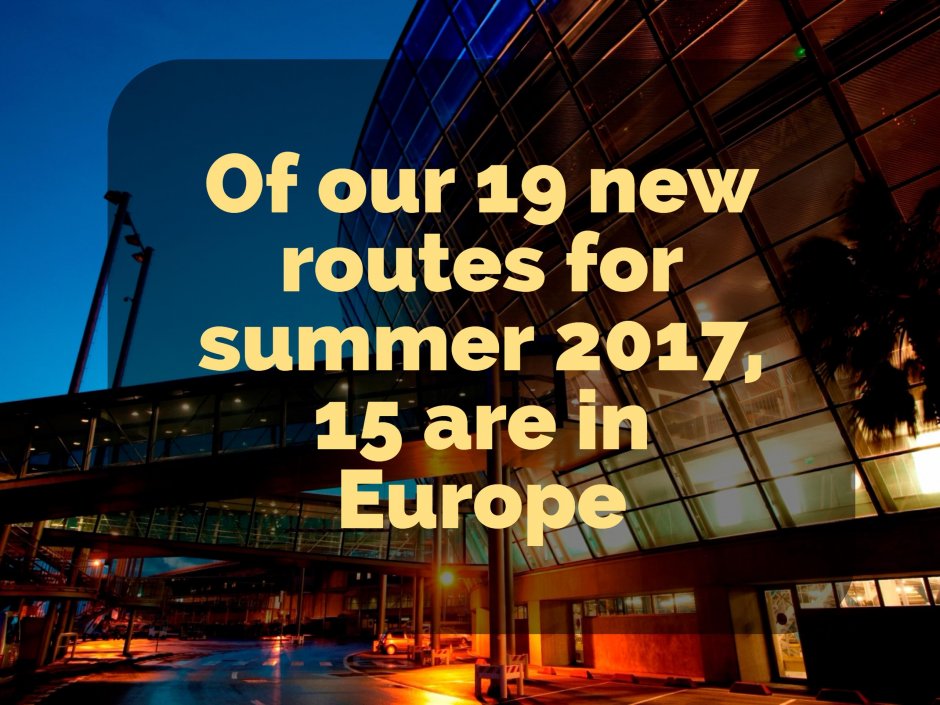 One more step towards competitiveness

Marsaux believes one of the major factors in this continued growth is its drive to become increasingly competitive as an airport.

"Following on from our tax and fees reduction initiative we are also making the third consecutive annual decrease to our Airport security tax, falling 18 percent compared with 2014 (-1.6€ per dep pax)," she said.

"This includes a ten-year freeze (‘inflation minus inflation’) on Airport Public-Service fees for the summer season as of April 2016."

All of the below are unserved routes; figures are both ways traffic pax.