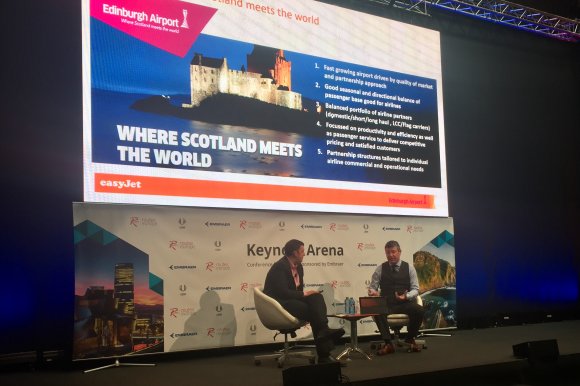 European budget airlines are working more closely together with airports than ever before. This includes new ways of helping each other, including connecting flight partnerships, allowing passengers to book a long-haul to short-haul journey with more than one operator.

But would an airport ever become alliance affiliated? That was one of the questions posed to Gordon Dewar, chief executive of Edinburgh Airport, during an on-stage conversation with easyJet’s director of strategy and network Robert Carey at Routes Europe 2018 in Bilbao.

Dewar said he it was unlikely, but believes some airports could be open to the possibility if there was a sound business case.

“Heathrow already does alliance terminals largely, so clearly there’s a reason to respond to alliances for efficiency and operational requirements,” he said. “Airports need to think very keenly about how to manage transfer traffic effectively.

“But it’s probably unlikely that an airport would want to tie itself exclusively to an alliance because you’re cutting off your nose to spite your face. There are always going to be other customers which don’t fit that alliance.

“However, I think when you have a volume that justifies bespoke and tailored services, then why not? It would probably be at the request of the airline and alliance, rather than an airport being proactive, but I’m sure any airport would be interested if there was a good proposition.”