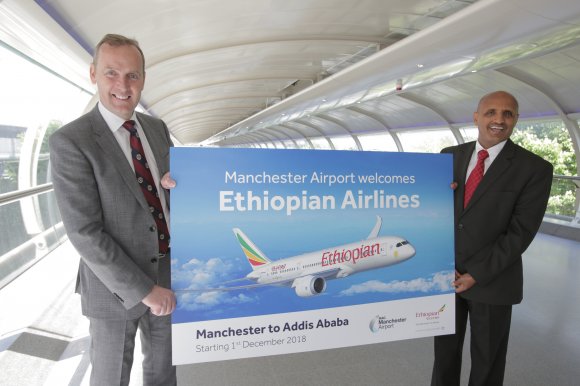 Ethiopian’s national carrier is to start a service to Manchester Airport later this year, providing connections to more than 58 countries across the African continent.

The route will start on 1 December 2018 and be operated by Boeing 787 with business and economy classes, initially transiting via Brussels.

“We are elated to start services to Manchester, our second destination in the UK next to London Heathrow which we have been serving since 1973,” said Tewolde Gebremariam, chief executive of Ethiopian Airlines.

“The socio-economic implication of the new flight is immense. With vast investment and trade potentials between Africa and the UK, the upcoming flight holds the promise of boosting trade, investment and tourism with ample business opportunities for investors and business people from both regions.”

Ethiopian Airlines' chief executive Tewolde GebreMariam is the latest industry heavyweight to join the line-up for the Routes Africa 2018 Conference Programme. He will take part in a CEO Keynote Interview, offering valuable insight into the carrier's growth and future strategy.

Ethiopian operates a daily non-stop service between London Heathrow and Addis Ababa on an A350-900 aircraft.

The planned Manchester route comes as the number of air services between the UK and Africa is increasing, largely thanks to leisure carriers reintroducing routes to North African countries affected by terrorism in 2015.

These include Thomas Cook Airlines and TUI Airways, which have begun operations to Enfidha in Tunisia from Birmingham, Bristol, Glasgow International, London Gatwick, London Stansted, Manchester and Newcastle.

Other new UK-Africa routes include British Airways' introduction of a London Heathrow-Seychelles service in March, while the airline will launch a three-weekly London Heathrow-Durban route in October.

According to figures from OAG Schedules Analyser, two-way capacity between the UK and Africa is set to grow to 6.9 million available seats in 2018, up from 6.3 million last year.

Speaking about the Ethiopian route from Manchester, the airport's chief executive Andrew Cowan added the service would “provide vital connectivity” to one of the continent’s most important hub airports.

“That will unlock dozens more destinations across Africa through Ethiopian Airlines’ unrivalled network,” he said.

Top ten UK-Africa routes during the first half of 2018 by two-way seat capacity: